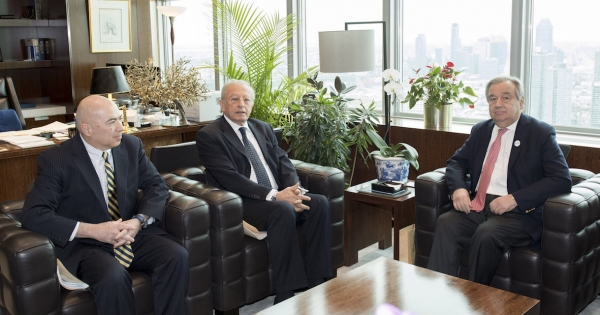 By continuing you agree to receive Avaaz emails. Our Privacy Policy will protect your data and explains how it can be used. You can unsubscribe at any time. If you are under 13 years of age in the USA or under 16 in the rest of the world, please get consent from a parent or guardian before proceeding.
This petition has been created by Staff C. and may not represent the views of the Avaaz community.
x

Sign this petition
Staff C.
started this petition to
Pension Fund CEO Sergio Arvizu, and UN Secretary-General Antonio Guterres
On 13 April 2017, the results of the UN Pension Fund elections for participant representatives were announced (1). Eighteen thousand staff voted, choosing four members and two alternates to represent them for a term of 4 years to the UN Staff Pension Committee and to the governing Board of the Pension Fund.

Yet despite these undisputed results, the CEO of the Pension Fund, Sergio Arvizu (pictured), has refused to accept the elected members neither to the Committee nor to the Board, despite four written requests (2). This puts the Fund in violation of Articles 5 and 6 of its own Regulations and Rules (3). It contrasts with the Fund’s immediate recognition of the representatives elected by the General Assembly.

This creates a precedent whereby the CEO can decide who sits on the board that administers the Fund.

It further disenfranchises 85,000 staff at a time when the Board is due to meet this July in Vienna to consider three key issues that may affect your retirement income&colon

The CEO’s refusal may in part be because three of those elected earlier claimed serious flaws in&colon
These claims were recently confirmed by an audit of the UN’s Office of Internal Oversight Services (4).

The UN has been unable to persuade the Fund to admit its elected participant representatives to the Board. The staff unions of the UN therefore need your voice to be heard.

Whether you are a staff member or retiree, please sign this petition and tell Secretary‐General Guterres and CEO Sergio Arvizu to&colon

Thank you for signing this petition. Please share it with your current and former colleagues. At the end of the day, this concerns your own retirement income.

In theory, yes, but in practice, no. According the Pension Fund's rules of procedure, the Secretary of the Board (CEO Sergio Arvizu) has to be notified by the secretary of that organization's staff pension committee. For most organizations, the secretary of an SPC is usually a human resources official. The UN, however, has subcontracted that role back to the Fund. The UN's SPC secretary is therefore Sergio Arvizu. He must therefore notify himself of the election results, which he is refusing to do. We believe this constitutes a conflict of interest.

‐‐Have the elections been disputed&quest

‐‐The Pension Fund CEO says he has concerns with two of the elected representatives. Why&questThe CEO has actually blocked all six representatives, not only two. The CEO has raised particular objections with two of the representatives, who are also staff of the Fund. He refers to a legal opinion from 1992 that says that they cannot be on the Board. He also says he brought this to the attention of the polling officers at the time of the elections and asked that the two staff be removed from the candidates' list.

However, being an employee‐owned fund it is quite normal that staff working at the fund may end up being on the Board. The fact that they worked at the Fund was made clear during the elections and will likely have contributed to their polling success. There was a feeling among UN staff that the Board needed members with an insight into the activities of the Fund, in particular given the problems of recent times, such as late payments, when an OIOS report discovered that the Fund's reporting to the Board and other stakeholders was at odds with its internal reality.

The Ethics Office has clarified that there is no conflict of interest for the two representatives as long as appropriate mitigating measures are put in place, such as not voting on issues that affect them, for example on the evaluation of the CEO, or not being on the audit or search committees. However, there would be no conflict of interest on issues such as granting equal rights to same sex couples or on granting advances to retiring staff are who are not paid on time. Further, it has been clarified that the 1992 legal opinion to which the CEO refers, was overturned at the time by the Joint Appeals Board. We are happy to work with the CEO and Ethics Office on developing appropriate guidelines to avoid any conflict of interest, perceived or otherwise.

At the time of the elections, the CEO's legal adviser contacted the polling officers and asked that they be removed from the candidates' list. When the polling officers asked the legal adviser to refer them to the rule that would exclude them from being eligible, there was no reply. This is because there is actually no rule barring them, which is natural as this is an employee‐owned fund.

‐‐Any reason why the CEO would be so adamant on this issue if it isn't about conflict of interest&questHis contract expires at the end of 2017 and is therefore up for renewal. The elected participant representatives made a number of claims last year against the CEO, which were substantiated by OIOS, including the posting of false data on the size of the payments backlog (http&colon//www.staffcoordinatingcouncil.org/attachments/article/241/1489700907_1_2017_002_pd.pdf).

Further, those representatives, along with staff unions, convinced the General Assembly to reverse a number of proposals by the Board last year that would have weakened the links between the Fund and the UN, and increased the Fund's overhead costs.

Those participants also thwarted prior plans by the CEO that would have weakened the rights of staff working at the Fund.

Yes, but according to our sources his office has hit a dead end and the CEO is unwilling to compromise.

Ultimately the decision on admitting the participant representatives to the Board is political and needs a political solution. Unless staff make there voice heard on this and show they care about being represented, the Fund won't act. We know that since the petition was launched the CEO has suspended this July's meeting of the Board, but that doesn't in itself achieve what is being asked for, which is recognition of the election results in which 18,000 staff voted (three times more than the previous election of 2012).

Today: Staff C. is counting on you