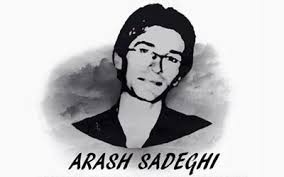 By continuing you agree to receive Avaaz emails. Our Privacy Policy will protect your data and explains how it can be used. You can unsubscribe at any time. If you are under 13 years of age in the USA or under 16 in the rest of the world, please get consent from a parent or guardian before proceeding.
This petition has been created by Fariba R. and may not represent the views of the Avaaz community.
x

Sign this petition
Fariba R.
started this petition to
people around the world
Arash Sadeghi, a jailed university student activist, was first arrested in July 2009, and released after 50 days in solitary confinement. He was then arrested again in December 2009 and released on March 2010. Arash was arrested for the third time in January 2011, while visiting the grave of his mother.
Arash’s mother died as a result of a heart attack due to the stress and shock of her home being raided by the security forces. Arash was kept in the infamous ward of 209 in Evin prison where he was torture and beaten up. As a result of the torture and beating, Arash has suffered from broken ribs, broken front tooth, and dislocated shoulder. Most of the time, as he told his family, he was not even given painkiller or medication. Arash has been sentenced to 19 years in prison in 2016. He is suffering from bone cancer in prison in Iran.
The authorities in Iran have deliberately deprived Arash of receiving specialized medical care. Arash has been suffering from pain in his arm and shoulder for more than 18 months, but the prison  infirmary in Rajaee Shahr, has been  prescribing anti-inflammatory drugs. Under the international pressure, Arash received an X-ray and MRI in which they found out Arash has Chondrosarcoma cancer, which it is the most prominent malignant bone cancer in youth . On the 12th of September 2018 , he underwent 7 hours of surgery. After major surgery, he needed to spend at least one hour in the recovery room. Unbelievably, security forces removed him from surgery room  and shackled his left hand and left leg while he was still unconscious. Security forces then blocked the area around his bed, which resulted in the medical team being unable to do routine post-op checks. His doctor required him to spend at least one month hospitalized following the operation. Doctors said that they needed this post-operative recovery and chemotherapy, radiation therapy or additional surgery.
Arash’s life is in a grave danger and he urgently needs medical care.
I need your help to put pressure on Iranian authorities to release Arash Sadeghi immediately and unconditionally for medical care.