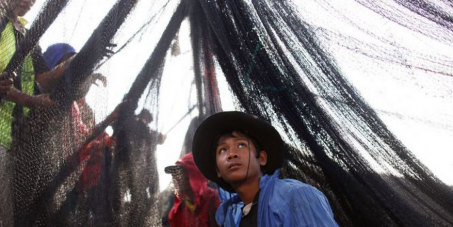 By continuing you agree to receive Avaaz emails. Our Privacy Policy will protect your data and explains how it can be used. You can unsubscribe at any time. If you are under 13 years of age in the USA or under 16 in the rest of the world, please get consent from a parent or guardian before proceeding.
This petition has been created by Environmental J. and may not represent the views of the Avaaz community.
x

Sign this petition
Environmental J.
started this petition to
Philip Clarke - TESCO Group CEO
**UPDATE** EJF Executive Director Steve Trent met with Tesco senior executives right before their Annual General Meeting in London on June 27th. He delivered this petition and called for assurances that Tesco will be taking action to eradicate slavery from its supply chains. The meeting was very positive and we are now waiting for an official response. We look forward to more positive updates soon! Thanks for your vital support. Let's keep up the pressure -- sign and share this with everyone!

Migrant workers are being enslaved in grim and violent conditions to produce many of the prawns on our supermarket shelves . But just as people across Britain rallied to ban the slave trade 200 years ago, we can get our biggest retailer to crack down on these abuses

Recent investigations by the Environmental Justice Foundation and The Guardian have shown serious human rights abuses including trafficking, slavery and murder in the Thai seafood industry . One migrant fisher saw a fellow crew member being murdered, reporting: “The other captains came and pinned him down. They tied his hands and legs to four boats, and they pulled him apart."

Thailand is a major supplier of prawns to the UK, and Tesco is one of the biggest companies that buys from a massive Thai company linked to this slavery. Tesco’s Annual General Meeting is tomorrow , and if enough of us call on them now, they can lead the way to stop the seafood slavery. They say they use their scale for good and that meeting customer needs is a priority. So let’s ask them to stop buying Thai prawns until they’ve finished rigorous, independent audits of their full supply chain.

We have to move fast, while this news story is fresh. Click below to sign now, then share this with everyone , so we can make it massive before we deliver it to Tesco’s CEO Philip Clarke in front of their shareholders and the watching media at their big meeting.

Today: Environmental J. is counting on you