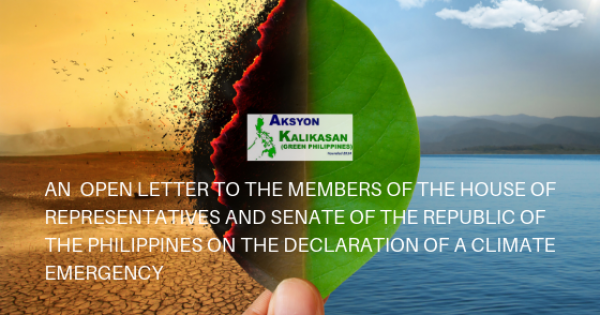 By continuing you agree to receive Avaaz emails. Our Privacy Policy will protect your data and explains how it can be used. You can unsubscribe at any time. If you are under 13 years of age in the USA or under 16 in the rest of the world, please get consent from a parent or guardian before proceeding.
This petition has been created by David D. and may not represent the views of the Avaaz community.
x

“The Clock is Ticking”

We would like to ask for your greater understanding on the urgency of DECLARING A CLIMATE URGENCY FOR THE PHILIPPINES .

According to a recent study, a fifth of the world’s major cities will face “unknown” climate conditions by 2050, as rising temperatures heighten the risks of drought and flooding.

Climate scientists at the Crowther Lab, a research group based at ETH Zurich, a science and technology university, analysed 520 cities across the world, including all capitals and most urban centres with a population of more than 1 million.

Globally, temperatures are likely to be 2.4C warmer on average – enough to kill nearly every coral reef and soar past targets set out in the Paris Agreement. Cities in tropical regions, which are likely to see the strongest impacts from climate change, will experience smaller changes in average temperature, the study said.

There will also be shifts in rainfall patterns, leading to more severe flooding and droughts, researchers said.

In another study, the Global Peace Index of 2019, the Philippines is the most susceptible country to hazards brought about by climate change. The study found that 47 percent of the country’s population is in areas highly exposed to climate hazards such as earthquakes, tsunami, floods, tropical cyclones and drought.

The Philippines was followed by Japan, Bangladesh, Myanmar, China, Indonesia, India, Vietnam and Pakistan. Manila also placed 7th with most risk to a single climate hazard, while Vietnam topped the list.

We, members of Green Philippines (Aksyon Kalikasan) wishes to echo the call and our support to the analysis made by Tony La Viña, acting executive director of the Manila Observatory. As stated, the temperature in the country is expected to rise by 7 to 8 degrees Celsius. This changes are “very serious, existential threat.”

With these changes happening it means more Yolandas, droughts, loss of water. The problems we’ve already been facing in the past 10 years will multiply and we will not be able to cope with that.

DECLARING A CLIMATE EMERGENCY will allow our country a window of more or less 10 years in which we can try to avert the effects. Declaring a climate emergency will mean shifting to renewable energy and abandoning coal power plants “faster than we’re already doing.

We invite the members of the House of Representatives to join over 740 local governments in 16 countries, including Britain, in declaring a much needed Climate Emergency.

We ask you, our legislators, to open your hearts and to give a thoughtful and thorough consideration to this urgent task at hand. We need to act now in order to have a good chance to enjoy the right to a better future.


Note : This document is supported and approved by the Board of Directors and Executive Committee of Green Philippines (Aksyon Kalikasan) and invites other like minded individuals and organizations to support it too.