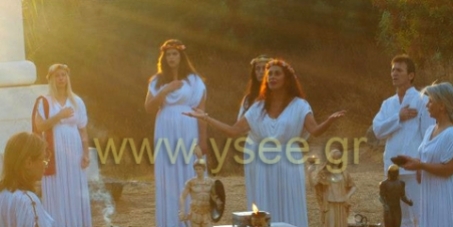 This petition is closed
50 Supporters
Stilian K.
started this petition to
Greek Government, Greek Parliament
Native Hellenic Tradition and Religion is not recognized as a Statutory corporation in Greece. Its hellenic Non Profit Organization YSEE - "founded in June of 1997 aiming to the morale and physical protection and restoration of the Polytheistic, Ethnic Hellenic religion, tradition and way of life in the 'modern' Greek Society" - has to pay trade tax, though it is not business but a supporting movement.

No one is helping them, neither the EU nor the greek Government, which is influenced by orthodox theocracy. They are attacked by orthodox Fundamentalists and Nationalists (dash, defamation, demagogy) without having the chance to protect themselves and the government takes no notice of their difficult situation. Some Ethnic hellenes received death threats, a book store and a house of hellenes were burned down on purpose, people are afraid to loose their jobs, if they come out as ethnic Hellenes/polytheists and no political party is willing to help them and to fight for their rights as a community or minority.

There is also the fact that the ethnocide of hellenes and the suppression of their religion by early byzantine christians gets No official Recognition by modern greek state. The aim of this petition is to put pressure on greek government to accept and recognize the hellenic tradition, their ethnocide and the right to exist and to have Rights, just like every other native tradition should have in the EU.

I am an ethnic Hellene and I worry about the future of hellenic tradition and of the future of my brothers and sisters in Greece. Please help us.

What they ask are three simple and democratic things:

1. the GRANTING OF THE QUALITY OF LEGAL ENTITY TO THE HELLENIC ETHNIC RELIGION

2. the PROTECTION OF THE HELLENIC ETHNIC RELIGION AS PART OF THE "NATIONAL HERITAGE" OF GREECE

3. the INSTITUTIONAL ESTABLISHMENT OF EQUALITY OF RIGHTS ("ISONOMIA") - EQUALITY BEFORE THE LAW - EQUALITY OF SPEECH ("ISEGORIA") OF THE HELLENIC ETHNIC RELIGION

Today: Stilian K. is counting on you