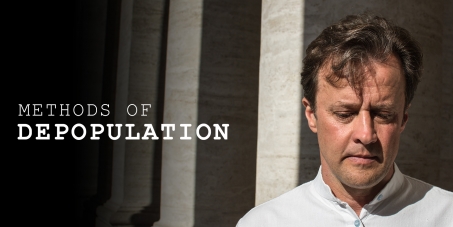 Pope Francis: Tell the world the truth about covert methods of depopulation.

By continuing you agree to receive Avaaz emails. Our Privacy Policy will protect your data and explains how it can be used. You can unsubscribe at any time. If you are under 13 years of age in the USA or under 16 in the rest of the world, please get consent from a parent or guardian before proceeding.
This petition has been created by Kevin M. and may not represent the views of the Avaaz community.
x

Sign this petition
Kevin M.
started this petition to
Pope Francis
The survival of the species depends on it. The truth will set us free and unite us in common cause.

Today is the 45th day of my hunger strike at the Vatican to compel Pope Francis to speak up with respect to covert population control methods in use since 1945.

Despite my sacrifices, Pope Francis, the international media and non-governmental organizations continue to remain silent.

My hunger strike is extensively documented in text, videos and radio interviews and is available online here: http://www.ice-pix.se/globaldepopulation/?fbrefresh=kevinprayer

This is completely unacceptable and shows that the entire system, including the highest religious authorities, is fully complicit in crimes against humanity by virtue of the code of silence it maintains to enable the international community and governments around the world to continue to poison humanity into extinction.

I have exposed the covert chemical, biological and bacteriological methods by which human fertility is being secretly subverted, as well the psychosocial and economic methods by which the family structure is being destroyed for the purpose of defusing the population bomb in two books that I make available to the world free of cost:

Killing Us Softly: Causes and Consequences of the Global Depopulation Policy
http://real-agenda.com/wp-content/uploads/2013/10/KILLING-US-SOFTLY2.pdf

More than this, in my OM Principles I have given an alternative solution on how to accomplish the necessary demographic and geopolitical goals on which the peace and prosperity of the planet depend without sickening mankind and downgrading the genetic and intellectual endowment of the human species:

My work has received the recognition of policy makers and diplomats, which is why it is published by Diplomacy and Foreign Affairs, one of the world’s most prestigious public policy magazines: http://diplomacyandforeignaffairs.com/?s=Galalae

To stop me from exposing the true nature of the post-World War II system, I have been arrested six times, have been separated from my children for more than three years, have clandestinely escaped Canada to save my freedom and life, have spent one year behind bars only to be released the day before the trial, all of my fundamental rights have been trampled upon with impunity, and have spent ten months in exile to be able to tell the world the truth.

Those who doubt the maliciousness of the attack on me can access primary legal evidence here:
http://real-agenda.com/wp-content/uploads/2014/05/Affidavit_of_Kevin_Galalae_2013.pdf

I will release more legal material in the weeks to come.

A brief account of my story is documented in a Wikipedia article: https://en.wikipedia.org/wiki/Wikipedia_talk:Articles_for_creation/Kevin_Galalae

But I did not cave in. To this day I fight for our rights and liberties in a desperate effort to bring the world back to sanity before humankind self-destructs.

I have done five hunger strikes to date, the longest being 75 days, and am now in Italy doing a sixth hunger strike in of the world’s most public places, St. Peter’s square, yet despite my riveting story of sacrifice and suffering for the wellbeing of mankind the press remains silent and the public at large uninformed.

Given the extensive damage done to humanity by the ongoing covert methods of depopulation, which have been in place since the early 1950s, we will not get a second chance to change course. We will be too weak to defend ourselves.

I understand that one way or another we have to reduce the global population to a sustainable level and share resources across national frontiers, but this is not the way to do it. The time has come for global legislation, for a set of common laws adopted universally to address the existential problems we face as a species and not merely as nation states. I call this new legal covenant the Laws of Conscience and Consciousness:

https://www.linkedin.com/profile/view?id=137249251&trk=nav_responsive_tab_profile_pic
We can keep our humanity and survive into the future. We need only take a leap of faith and work seamlessly together, as one.

But to do so we need to free the truth so the truth can set us free.

Pope Francis must speak up and tell the world the truth. Please make sure that he does. Sign this petition and let us make history.