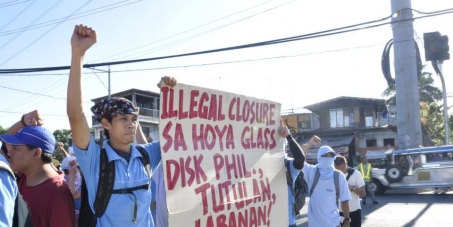 By continuing you agree to receive Avaaz emails. Our Privacy Policy will protect your data and explains how it can be used. You can unsubscribe at any time.
This petition has been created by LEADER I. and may not represent the views of the Avaaz community.

Sign this petition
LEADER I.
started this petition to
President Aquino, Department of Labor and Employment, Hoya Glass Disk Phils
Despite being constitutionally-guaranteed, workers are deprived of their right to organize in the Philippines. After successfully registering their union at the Department of Labor and Employment, 2600 workers lost their jobs due to the company's illegal closure without prior notice and proper legal proceedings. More than 2400 workers were deceived into signing their quitclaims and waivers, making them believe that the papers were the company's notice of closure. Practically held hostage, workers were forced to sign the documents as their last salary was included in the separation paycheck, and armed company guards surrounded them during the whole procedure. It is vital to create a huge movement that will call for justice for all 2600 workers who wished nothing but a decent living, that will subsequently give way to a better productivity in the workplace. Let us help all workers who suffer from capitalists' endless suppression! Stop trade union busting!
Report this as inappropriate
There was an error when submitting your files and/or report.
Inaccurate Inappropriate language Hate speech Illegal Commercial/spam Offensive