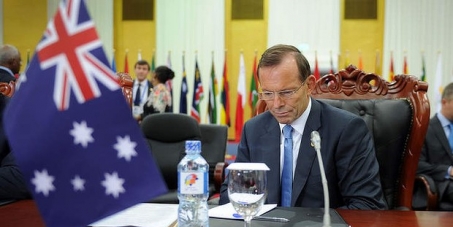 Obama to Abbott: get out of the way

By continuing you agree to receive Avaaz emails. Our Privacy Policy will protect your data and explains how it can be used. You can unsubscribe at any time. If you are under 13 years of age in the USA or under 16 in the rest of the world, please get consent from a parent or guardian before proceeding.
This petition has been created by Emily M. and may not represent the views of the Avaaz community.
x

Sign this petition
Emily M.
started this petition to
President Barack Obama
Seriously? Tony Abbott has just taken climate change OFF the agenda at the G20, as if scrapping The Climate Department, The Climate Commission and yes, soon, the carbon price wasn’t enough. Now he’s literally getting in the way of OTHER countries taking action.

Our PM is meeting with Barack Obama next week in Washington and the President has just put his legacy on the line for climate, cleaning up America’s energy production even in the face of huge opposition. Obama will be busy selling his climate policies, so let’s ask him to give Abbott a copy of Congress’ climate report when they exchange gifts at the White House.

Climate tipping points are threatening to change the very world we live in irreversibly. There’s never been a more important time to act -- if President Obama’s subtle present doesn’t convince Abbott, then he can force him out of the way of other countries and put climate change back on the G20 agenda. Sign now!

Emily M. needs your help with "Obama to Abbott: get out of the way". Join Emily M. and 44,337 supporters today