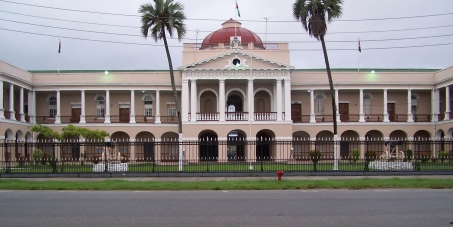 By continuing you agree to receive Avaaz emails. Our Privacy Policy will protect your data and explains how it can be used. You can unsubscribe at any time. If you are under 13 years of age in the USA or under 16 in the rest of the world, please get consent from a parent or guardian before proceeding.
This petition has been created by Concerned G. and may not represent the views of the Avaaz community.
x

Sign this petition
Concerned G.
started this petition to
President Donald Ramotar, Guyana
On Monday November 10, 2014, President Donald Ramotar prorogued the 10th Parliament of Guyana by proclamation. In an address to the nation, President Ramotar explained that this step had been taken by his administration in order “to ensure that the life of the 10th Parliament was preserved.” In fact, the effect of this proclamation is to send Parliament into an enforced recess, with no date fixed for resumption, so its real purpose is to preserve not the life of Parliament but rather that of the ruling minority government. The President has effectively taken away the constitutional right of the people’s elected representatives to debate and pass a verdict on the performance of the Government . He now leaves the country in a complete state of uncertainty as to when parliamentary democracy, the edifice of the Constitution, will be restored.

While technically it may seem that the act of prorogation was lawfully made, when the Constitution is read as a coherent whole it becomes less apparent that it authorises prorogation for the purpose for which it has been proclaimed by President Ramotar. The power to prorogue is a reserve personal power of a sovereign, common to monarchical Parliamentary systems. It is therefore out of place in a Presidential system like Guyana’s, where its retention is another manifestation of the supremacy of the ruling party over the elected representatives.

Moreover, in 2000 the no-confidence procedure was inserted as one of a series of constitutional reforms. The Hansard of December 15, 2000 on the 2000 Constitutional Amendment Bill passed unanimously by the National Assembly records then PPP Leader of the House Reepu Daman Persaud as describing the amendments as “broaden[ing] the scope of democracy and remove[ing] certain powers that were considered dictatorial.” Specifically dealing with the new clause to allow for a vote of no confidence he described it as “an important amendment” and “an important step.” To invoke the power to prorogue in 2014 – a leftover from the 1980 constitution - in order to thwart this procedure is to undermine and render nugatory the slew of reforms of 2000 that sought to promote accountability in government and an inclusionary democracy. Indeed, the act of prorogation by President Ramotar is no different from the suspension of the colonial Constitution in 1953 when the first government led by Dr. Cheddi Jagan elected under universal adult suffrage was fired and led to outrage in and out of then British Guiana.


If this is not illegal, it is certainly undemocratic and in contravention of the Herdmanston Accord of 1998 negotiated by CARICOM and which led to the constitutional reforms of 2001.
With Parliament in abeyance, the minority People’s Progressive Party (PPP) government will now be able to govern without even the minimal oversight of Parliament. This will bring to an end parliamentary scrutiny of government spending as well as anydebate and possible sanction of PPP ministers for personal and public misconduct and abuse of power. This suspension of Parliamentthus threatens to dispense with our inherited traditions of responsible and accountable government and represents the abandonment by the PPP of any pretence of democratic rule.

Aside from the questionable legality of the prorogation of Parliament on November 10, the significance of this Proclamation to Guyana can only be understood in the context of our fraught history. It was only in 1992 that the PPP administration ascended to office in what they heralded as a ‘return to democracy’. Yet, successive PPP administrations under former President Bharrat Jagdeo and now President Donald Ramotar have been marked by serial infractions of key institutions of democracy including:

• No local government elections since 1994, in violation of the Constitution;

• Failure to assent to Bills passed by the National Assembly;

• Extensive allegations of corruption in government, which has consistently led to Guyana’s ranking as the most corrupt country in the Anglophone Caribbean and one of the most corrupt in the world, according to data compiled by Transparency International;

• A breakdown of the institutions of law and order, involving unsolved criminal activity, police brutality that has included torture of suspects, and a high level of extra-judicial killings;

• Multiple infractions of the Constitution by PPP Ministers and other high-ranking officials in government, including, for example:

o Unauthorised expenditure by the Minister of Finance, who was discovered to have taken and spent money from the Consolidated Fund without Parliamentary approval as required by the Constitution, and

o The release of a recorded telephone conversation in which the Attorney General warned a friend of impending extra-judicial sanction against a prominent newspaper critical of the government, and claimed he was privy to the suborning of the justice system by the President in favour of a private citizen for their mutual benefit.

These instances represent only a sample of the abuses of power committed by the PPP administration over its uninterrupted period of 22 years in power. This latest act of proroguing Parliament - without even giving Guyanese people a set date for reconvening and leaving the country in a state of limbo - is particularly reprehensible since it is the public abandonment of one of the last vestiges of democratic rule. By silencing the most prominent forum for the expression of the people’s will, the PPP minority government has shown its contempt for the people and democratic institutions of Guyana, subordinating them to its own narrow, partisan interests in what seems to be an attempt to cling to power by any means necessary.

We, the undersigned, are concerned citizens of Guyana. We ask that other citizens, both home and abroad, as well as the members of the regional and international community stand in solidarity with us by calling on President Ramotar to re-convene Parliament immediately and return to the path of democracy, including long overdue constitutional reform and the removal of the last vestiges of constitutional dictatorship.