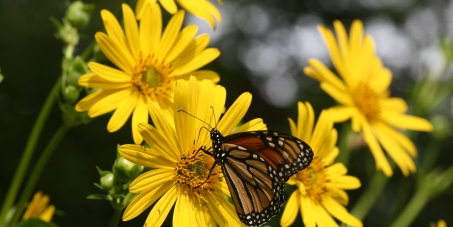 President Obama: Please increase funding and awareness to save the Monarch butterfly migration.

By continuing you agree to receive Avaaz emails. Our Privacy Policy will protect your data and explains how it can be used. You can unsubscribe at any time. If you are under 13 years of age in the USA or under 16 in the rest of the world, please get consent from a parent or guardian before proceeding.
This petition has been created by Richard K. and may not represent the views of the Avaaz community.
x

Sign this petition
Richard K.
started this petition to
President Obama
The monarch butterfly must surely be one of the most iconic insects on the planet. My five year old son and many other children his age know this butterfly well. It is easily recognised for its striking colouration and it is famed for undergoing one of the longest insect migrations in the world. When I travelled across U.S. nearly 30 years ago, I intersected lines of monarch butterflies on their way to Mexico. I looked north and I looked south. As far as the eye could see, there was an endless stream of butterflies. The migration on the way back to Canada is done by a series of generations, each one relying on milkweed plants to complete its lifecycle.

Last year, many Canadians and Americans were asking "where are the Monarch butterflies?" Hardly any arrived in Canada. In part, the weather is playing a role, but no one should be under any illusions. The overwintering population in Mexico has been steadily dwindling and now stands at less than 5% of the peak in 1996. The Monarch butterflies are not making their way back to Canada because more milkweed is being cleared in parts of the USA by using herbicides. Genetic engineering of herbicide-resistant crops is allowing farmers to use herbicides to an ever increasing degree and the Monarch butterflies have less chance to complete their life-cycle on their journey north.

If the USA can use human ingenuity and enterprise to build a U.S highway system for the movement of cars; or an interstate highway system to ensure the movement of military supplies and soldiers; then surely Americans can piece together a monarch flyway system with fields of milkweeds so that these beautiful butterflies can carry on performing one of the most incredible feats of nature. The Canadian provinces have many areas that can support these butterflies. The Mexican authorities have been working to eliminate logging in the forests where butterflies overwinter. Sign this petition to let the President of the United States know how important this natural wonder is. The President of the United States should increase funding to farmers to set aside land in areas where there is a paucity of Milkweed and to promote the planting of native plants in green spaces.