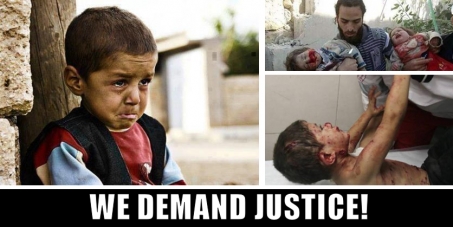 By continuing you agree to receive Avaaz emails. Our Privacy Policy will protect your data and explains how it can be used. You can unsubscribe at any time. If you are under 13 years of age in the USA or under 16 in the rest of the world, please get consent from a parent or guardian before proceeding.
This petition has been created by Wakas M. and may not represent the views of the Avaaz community.
x

Sign this petition
Wakas M.
started this petition to
President of International Criminal Court
Update : This is a campaign from few years ago but in May 2021 the new attacks from Israel have breathed life into it again.
....
We the citizens of the world demand that Benjamin Netanyahu as person and Israel as the apartheid state is put on trial along with all the evidences that prove it to be a country responsible for terrible war crimes against humanity and people of Palestine in general. Only in the first three weeks of the genocide by Israel, they used over 17 000 tons of rockets and bombs, martyred 1967, from which 1600 were civilians, 371 children, 10000+ civilians injured and over 500 000 people made homeless.

Why should Israel be put on trial?

1. At the time of writing this, Benjamin Netanyahu is responsible for killing over 1000 civilians. Many of those are children, women and people with absolutely no affiliation with any group of any sort. They have been wiped off the map as if they were totally insignificant people with no right to live. 2. Israel has been bombing public places, schools, family homes, religious places and has sunk to the lowest level and recently attacked children hospitals.
3. They used White Phosphorus in 2009 and have used it again in 2014. They air-burst white phosphorus in 155mm artillery shells in and near populated areas. Each air-burst shell spreads 116 burning white phosphorus wedges in a radius extending up to 125 meters from the blast point. White phosphorus ignites and burns on contact with oxygen, and continues burning at up to 1500 degrees Fahrenheit (816 degrees Celsius) until nothing is left or the oxygen supply is cut. When white phosphorus comes into contact with skin it creates intense and persistent burns.4. The establishment of settlements by an occupying power in occupied territory violates international humanitarian law which is the body of law governing situations of armed conflict and military occupation. Yet Israel is expanding it's settlements and will obviously take over the Gaza area as no Palestinian will come back since they have no place to call home.5. Israel's apartheid setup where they have check-posts, blockades, and have taken every right from the Palestinians so they can't even breath without having an Israeli soldier on their back. This has to stop and it's nothing less than being a perfect definition of an apartheid settler state.We demand that Israel is put on trial for war-crimes and Benjamin Netanyahu is held responsible for the deaths of all innocent people of Palestine along with being the reason for thousands of families being destroyed mentally and physically to the extent that they will never recover again.

Mr. President, I know you see what's happening down there, I also know you have a family, I am sure you do everything possible to take care of them. If we are to live in this world as a big happy family, we have to start caring for others as well. What's happening in Palestine, since over 60 years, is absolutely unacceptable, it needs to STOP!

You can get lots more evidence from Human Rights Watch, UN, journalists, and doctors in Gaza. If that still isn't enough, I feel you are letting down billions of people worldwide by letting a criminal get away with it. We can NOT allow a country get away with what they are getting away with on a daily basis, just because USA always VETOES them out whenever a charge against Israel is mentioned in the UN.