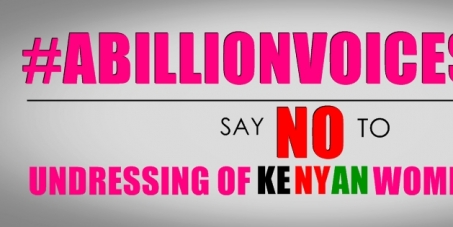 Mr. President: The Buck Stops With You!

By continuing you agree to receive Avaaz emails. Our Privacy Policy will protect your data and explains how it can be used. You can unsubscribe at any time.
This petition has been created by Ann N. and may not represent the views of the Avaaz community.

THIS IS CRIMINAL, IT IS SEXUAL & GENDER BASED VIOLENCE, IT IS ROBBERY WITH VIOLENCE, AND IT IS A TOP SECURITY ISSUE!

1. In a most disturbing trend and crime wave, women have been stripped / undressed on the streets of Nairobi and other parts of the Kenya.

2. This has been done under the guise of scanty dressing and or wearing inappropriate dress that is deemed too short or too revealing. However, and from the 1st hand narration by one of the victims, she says she was stripped when she demanded that her debt of three eggs be paid by her customer(s).

4. Other victims have not yet spoken out obviously too intimidated, scared and even fearing the backlash of identification amongst other reasons.

5. The freedom and right to dress is enshrined in the Kenyan Constitution under Art. 27 (4)& (5) and so is the right to dignity, bodily integrity and or right and freedom from non-discrimination.

6. Violence against women is an early warning sign and often times heralds a total breakdown of law and order.

7. The President of Kenya does not seem to understand this serious crime of sexual and gender based violence nor the debilitating consequences it has on victims and survivors. He has gone on to wonder where the mother, of a three year old defiled by her two uncles, was at the material time of offense.

8. This has not only trivialized the war against sexual and gender based violence but it seemingly suggests that as the Commander in chief, he has no responsibility to protect, defend and or even promote the Constitution which he swore allegiance to. It also suggests security is not his responsibility and or his domain.

9. Violence against women is a serious crime with debilitating consequences to the victims and survivors and as a society / world we have an obligation to stand firmly against all its forms and manifestations.

10. This is therefore a call to action and a call to duty. The President must understand that the security of his citizens is one of his most critical obligations as the Commander in Chief and if he cannot guarantee the security of his people especially the women and most vulnerable in society, he must step down from this position as Head of State. The Buck Stops with the President!

The ordeal that Wairimu (Kayole’s, Nairobi latest stripping victim) went through and the violence meted against her for simply asking that her debt of three eggs be paid is vile, the worst form of sexual and gender based violence and is an act of robbery with violence. It is patriarchy. It is totally unacceptable, and a great national shame. This epidemic must be clamped down with immediate effect. Mini skirts or scanty dressing is just an excuse for violent crime and brutality. Indeed, those making inciting statements on social media networks are accomplices to these serious crimes and they too must be apprehended. Women have a constitutional right to dress whichever way they want- period! Read Art. 27 (4) & (5) of the Constitution.

At the root of all the violence is deep rooted and fundamental gender inequality that creates the rationale for sexual violence, humiliation, intimidation, control, abuse, stripping, mob justice and even murder of women under the guise of immoral dressing. Finally it has now become an excuse for robbery with violence as in the specific example of Wairimu. At the root of this criminal behavior are perpetrators who believe that they have a right to be in control over women and or their resources even if it requires all amounts and forms of violence. It is also rooted in the belief that women deserve less social, economic and political power and that it is indeed acceptable or even necessary to exert power over them.

This all about power, control! It is patriarchy and its impunity. At the bottom is a perpetrator who believes he has a right to abuse a woman. He also knows that he can get away with it. He believes that no police can arrest him or that the criminal justice system will never hold him to account. Such perpetrators feel they are justified or are permitted to touch, grope, strip, physically attack and now as evident from the Kayole, Nairobi stripping shame, rob with violence.

This is about the historical unequal power relations between men and women arising out of the said gender inequality and discrimination. It is a trite fact that societies that have fewer economic, social, cultural and or political differences in power between men and women have fewer case of Violence Against Women. As the US President, Barrack Obama has stated over and over again, “the single best measure of whether a country will succeed or not is how it treats its women". Worse still, when countries fail, it is the women who pay the highest price as they face acts of brutality including gang rapes et al.

Some have tried to excuse this criminal behavior by alleging alcohol or religious values. There is no evidence that alcohol makes people violent. Perpetrators who assault women never assault their own friends who they drink with every day, nor do they assault their neighbors when they get home or bosses at the work place. Likewise, no religion under the sun has such prescriptions and those masquerading as moral demi-gods are criminals and must be prosecuted. There is simply no excuse for this criminal behavior and all those that have encouraged it under moral, alcoholism et all must be held to account.

It cannot be business as usual in Kenya and this must be a turning point in our Nation. The whole Nation must rise up and condemn this epidemic while taking action to root it out in every corner of our society whenever it rears its ugly head.

1. This is a direct attack on our Constitution. The President must move with haste to protect, promote and defend our Constitution by leading all arms of government to take tangible measures to stamp out this vile. As Wandia Njoya has rightfully stated, " If the President cannot run a coherent security system, he must resign."The buck stops with the President.

2. We must adopt a Zero tolerance approach to all criminal acts of violence against women in our homes, communities, and public places. Every Kenyan has an equal obligation to protect, promote and defend our constitution. It is no longer an excuse to say you could do nothing! This is a call to action, a call to duty! As Edmund Burke said: 'The only thing necessary for the triumph of evil is for good men (and women) to do nothing.

3. Violence against women is a crime and must be rooted out immediately and with urgency. It is not socially acceptable and it is even wrong to insinuate that a man can dictate what his wife or girlfriend should wear. A man who has no respect for his wife will not respect his own daughter and neither will he respect strangers on the street. The freedom and right to dress is enshrined in our constitution under Art. 27 (4)& (5) and we must protect, promote and defend our constitution.

4. The Inspector General of Police must apprehend the perpetrators and bring them to book. This includes all perpetrators caught violating women rights (in private and public) but also the perpetrators using their blogs and social media networks to spread hate and bile against women. If he is unable to discharge the duties of his office, he must step down and if he cant step down the President must relieve him of his duties for the safety and security of the women.

5. The DPP and the Judiciary too must move with haste. Those apprehended must become examples to the rest of society of what will not be allowed to roll back the constitutional gains. Parliament too should address any emerging gaps in our laws to ensure we become a Violence free society.

6. This is a public health emergency. How many women have been raped, violated and infected with disease under the guise of dress and are too intimidated and scared to come out and seek treatment? The government needs to put out an emergency mechanism that is safe and secure and that gives victims the kind of dignity that will enable them seek medical attention while reporting this atrocities.

7. The church leaders must take a firm stand and speak our all the time against this epidemic. Many of the perpetrators will frequently and ironically hide under the guise of religion and or good morals! VAW has incredible serious consequences to the victims and survivors. It affects millions of lives of women in Kenya. in all social economic, political and educational classes. It cuts across cultural, religious barriers and impedes women’s full participation in their own lives, their families and societies.

8. The UN Rapporteur on VAW must come to Kenya with a high level team to collect information about this epidemic, while simultaneously activating the entire UN machinery and Global Network to end these shameful violations.