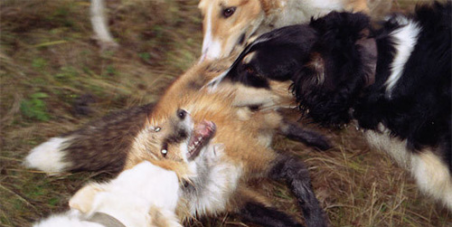 By continuing you agree to receive Avaaz emails. Our Privacy Policy will protect your data and explains how it can be used. You can unsubscribe at any time. If you are under 13 years of age in the USA or under 16 in the rest of the world, please get consent from a parent or guardian before proceeding.
This petition has been created by Dmitry T. and may not represent the views of the Avaaz community.
x

There are lots of training centers in Russia, where the prisoners - wild animals - are kept and victimized. They are bitten and torn up by hunting dogs for money paid by their owners. The hounding is a kind of business. Foxes, bears, raccoons, wolves, boars, badgers, squirrels, hares, martens and their cubs are sacrificed, as well as other animals, lions, for example, for people hunting in other countries. The federal legislation allows training on living animals all year round, and does not consider biological nature of animals.

They live in hell. They are kept in tight, dirty cages full of their excrements. The cages are so small that animals can hardly move or change their positions. They are so hungry that they do not have enough strength to protect themselves against dogs. They only leave their cages to be bitten or tortured by dogs. If they are wounded or crippled, they are not treated, but used for dogs training again and again till they die from wounds, shock, or are shot.

These training centers are advertised as very thorough for training hunting dogs on living preys, even if they are not going to be used for hunting. This sadism is advertised in books and web site on hunting. For upbringing the dogs and their aggressiveness development, it is recommended to use stray cats and fox cubs at first.

The hunting dogs “trainings” take place not in training centers only. After a female bear or a female fox has been killed, it is recommended to train the dogs on killing their cubs. In his book “Hunting dog breeding” V. Leontiev says:
“On a forest meadow they should bind a wolf. A hunter with helpers delivers and holds a pack of dogs 100 steps away from a wolf. The pack surveys the rushing wolf and attacks it. The hunter comes to the pack and encourages the dogs: “Good! Sic ‘em!” After they have finished with the wolf the dogs should be kept attached. Two days later, the hunting should be repeated on another wolf without 2 or 3 of the most aggressive dogs so that the less aggressive dogs could finish the wolf”. They put a wooden stick into the mouth of the wolf and bind the mouth. They use 8-10 month old wolves.

In the Great Encyclopedia of the Hunt (Ripol Classic, Moscow, 2010) it is recommended to train a puppy for hunting on burrowing animals the following way: “At first, use a fox with her mouth and hindpaws bounded with a rope. The fox is then pushed with a stick into a burrow and the hunter commands: “Seek dead!”… The puppy would find the animal and begin to bark at the command “Sic ‘em!”. Soon, the dog will start to tear the fox up”.

The more aggressive and more malicious the dog is the more valuable it is and is used for breeding. The hunters conduct competitions among hunting dogs where the hounding animals are attacked during several days. For example, if a laika bites hindpaws of a bear – the most soft and sensitive spots - the better the laika is.

Russian Cynological Federation wrote hounding rules for each dog breed on all wild animals which are used as an object for hunting.

There is not a single word in the Russian legislation about how the wild animals should be treated and kept.

The tragic story of the small bear Motya is known worldwide. He was an Ursus Arctos Isabellinus - a rare subspecies of the brown bear, declared critically endangered in the Red List of 3 states and in the List if CITIES. The zoo in the town of Perm sold this 2-years old bear to hunters, which is a common practice there. In the report by veterinary inspectors it says: "The bear examined by us has a height of an one-year-old brown bear, disproportionate development (a big head and a small little body with undeveloped muscles of the pelvis), below normal fatness. Because of the small size of the cage and the lack of daily cleaning, the bear is wet and soiled with excrements. This bear is growing up in constrained conditions and is obviously exhausted intentionally, so that it is easier to handle and use him. He is used as a mean for training hunting breeds dogs, which is not in contradiction with hunting rules...". Thousands of people and many organizations fought for his rescue in vain: Motya was tortured to death at the hounding station near Perm. A young female brown bear is now being tortured instead of him.

Russian people, well-known scientists and artists expressed their opinions against the hunting law and the hunting rules which legalize the hounding. They require hounding to be banned. In 2013, 2 petitions against hounding, signed by 120.000 Russians was handed in to the State Duma (parliament). However, public opinion is not taken into account in Russia, so they gave an absurd, a meaningless and an incompetent reply.

Russian officials hunt animals which are in the Red List from helicopters with impunity, they shot females with cubs. In the Far Eastern of Russia the slaughtering of the brown bears, Asian bears and Amur tigers takes place, their dead parts are then sent to China.

Bear is a symbol of Russia. Bears are tortured at many biting stations. The brown bear is included in IUNCH Red List which operates the International Convention of Preservation of the Biodiversity. Russia is a partner here. In the Bern Convention about the protection of the wild fauna, flora and nature environments in Europe, the bears Ursidae are protected. Russia is an observer here.
In the International Convention CITES brown bear is in Appendix II. Russia is a site here.

At the time of the Winter Olympic Games 2014, we remember the symbol of the Olympic Games in 1980 in Moscow – the female bear Katya who was as a jester in the circus and who has been living without being able to move in a very tight cage in an old rusty bus, without light or ventilation. The famous bear Masha, who worked for many years in a circus, has been torn up by hunting dogs in the biting center of Fryazevo near Moscow.

We ask you to require the total ban of hounding and the closure of the biting centers.

Today: Dmitry T. is counting on you