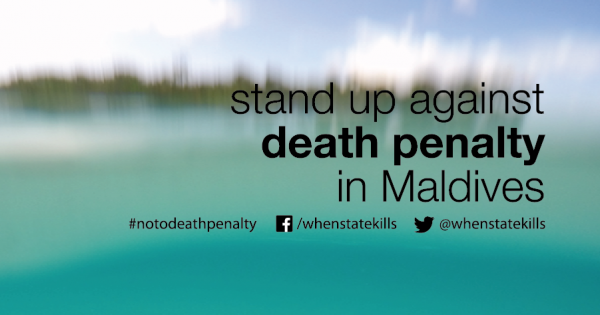 By continuing you agree to receive Avaaz emails. Our Privacy Policy will protect your data and explains how it can be used. You can unsubscribe at any time.
This petition has been created by Whenthestatekills M. and may not represent the views of the Avaaz community.

Sign this petition
Whenthestatekills M.
started this petition to
President of the Maldives Mr Abdulla Yameen
We are deeply concerned about the Maldivian government’s move towards implementing the death penalty. The last known execution in the country was over a half century ago in 1953. We therefore demand an immediate halt to this regressive step.

Taking a human life by the State is a cruel punishment. It violates the most basic human right: the right to life.

We are also shocked the new Regulation on the Implementation of the Death Penalty allows the imposition of the death penalty on persons under the age of 18. This is a violation of various international human rights treaties that the Maldives is party to, including Article 6 of the International Covenant on Civil and Political Rights and Article 37 of the Convention on the Rights of the Child.

The move to implement the death penalty is especially disturbing given the state of the Maldivian judiciary. The Maldivian judiciary is perceived to be highly corrupt, politicized, and many judges are under-qualified, as noted by independent assessments and research (International Commission of Jurists, UN Special Rapporteur on the Independence of Judges and Lawyers, Transparency International Global Corruption Barometer 2013).

Under conditions of such a questionable legal and judicial system and a generally inadequate social justice system, the required conditions of the applicability of Sharia punishments such as Qisas do not exist.

Superficial, selective, literalist and taqlidi lip-service to narrow interpretation of Sharia does not serve the universal message of Islam. The universal message emphasizes forgiveness and clemency over killing. It calls for establishing social justice in the society, the lack of which contributes to social ills, including homicide.

We once again demand the Maldivian government to scrap this hard-line yet superficial policy immediately.
Report this as inappropriate
There was an error when submitting your files and/or report.
Inaccurate Inappropriate language Hate speech Illegal Commercial/spam Offensive