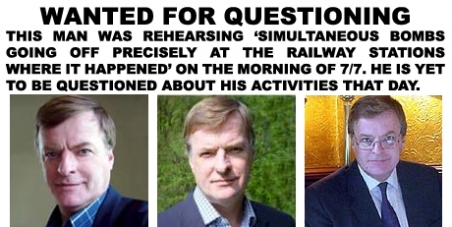 By continuing you agree to receive Avaaz emails. Our Privacy Policy will protect your data and explains how it can be used. You can unsubscribe at any time. If you are under 13 years of age in the USA or under 16 in the rest of the world, please get consent from a parent or guardian before proceeding.
This petition has been created by Fork T. and may not represent the views of the Avaaz community.
x

Having read the official Home Office report of the 7/7 London bombings, it remains of particular concern that some of the criminals involved with the London bombings are still are large.

There is one individual, Peter Power, whose connection with the London bombings appears near-certain. (The introductory 7/7 Quiz at july7.co.uk calculates the chance of this man being connected to the bombings as greater than 99.99999%.)

The purpose of this petition is to bring about an public, transparent investigation into Peter Power and his likely role in the 7/7 bombings.

If he's innocent, this will give him the opportunity to finally exonerate himself.

If he's guilty, this will give us the opportunity to put him behind bars and to make the United Kingdom a safer place.