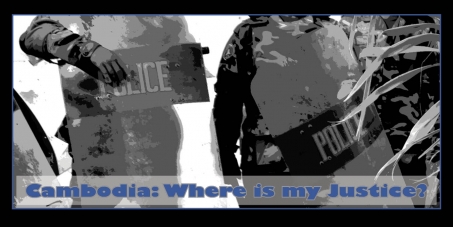 By continuing you agree to receive Avaaz emails. Our Privacy Policy will protect your data and explains how it can be used. You can unsubscribe at any time. If you are under 13 years of age in the USA or under 16 in the rest of the world, please get consent from a parent or guardian before proceeding.
This petition has been created by The C. and may not represent the views of the Avaaz community.
x

Find out more about CCHR's Where is my Justice Campaign: http://www.cchrcambodia.org/Right2Justice

Read and print the petition in Khmer: http://bit.ly/1gF0oIT

Immediately following the contested National Assembly Elections, which took place on 28 July 2013, Cambodian people were able to exercise their right to freedom of assembly in an unprecedented manner. However, on 15 September 2013, security forces resorted to their old tactics and have since repeatedly and disproportionately used excessive force to crack down on protesters. The post-election violence has already led to the death of six persons, the disappearance of at least one individual and to dozens of injured. However, while protesters have been arrested and are currently facing charges, an independent investigation into the excessive use of force by Cambodian security forces has yet to take place.

The rights to justice, truth and remedies for victims of gross human rights violations are promoted and protected both under domestic and international law. According to international standards, states, including Cambodia, must investigate gross human rights violations and take action against those responsible, provide victims with effective access to justice and effective remedies as a necessary step to prevent a recurrence of violations.

Article 8 of the Universal Declaration for Human Rights, which is directly applicable in Cambodia, stipulates that ‘’everyone has the right to effective remedy by the competent national tribunals for acts violating the fundamental rights granted him by the constitutional law.’’ Moreover, the UN Basic Principles for the Protection and Promotion of Human Rights through Action to Combat Impunity states that victims and their families have the inalienable right to know the truth about the circumstances in which violations took place, whilst ensuring that those responsible are prosecuted, tried and duly punished.

Please join the victims of state security forces’ violence, their families and the Cambodian Center for Human Rights' (“CCHR”) call to Prime Minister Hun Sen, by signing the petition below:

We, the undersigned, are concerned with the failure of the Royal Government of Cambodia to hold the law enforcement forces accountable and to carry out an independent investigation into the arbitrary executions, excessive use of force and violations of people’s right to freedom of assembly that have taken place since the National Assembly elections.

We call on you to uphold Cambodia’s commitments to human rights and to:

- Ensure a prompt, public, independent and comprehensive investigation of the disproportionate use of excessive force by Cambodian security forces to crack down on protestors;

- End the cycle of impunity for the perpetrators by bringing them to justice; and

- Uphold victims’ right to justice and remedies, including reparations.

The petition will be delivered on 24 April 2014, one month after the celebration of international “Right to Truth Day.”

Today: The C. is counting on you