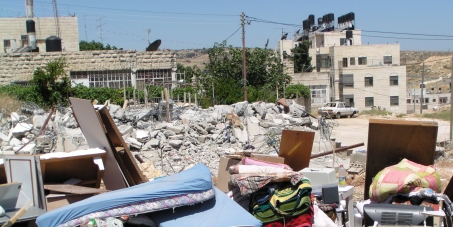 ***PLEASE NOTE: This is a petition specifically for rabbis and cantors. Please only sign if you are a rabbi or a cantor AND be sure to indicate your appropriate title***


RABBIS AND CANTORS: Please join RHR's sign on letter encouraging Israel's democratic institutions to end a long standing injustice. We are waiting for Israel's High Court to decide on the petition submitted by RHR and partners to return zoning and planning authority for Palestinian communities in Area C to Palestinian hands. We believe that this will help end the policy of making it nearly impossible for Palestinian families to obtain a legal permit, and then demolishing homes built "illegally." However, the judges themselves have indicated that the State could simply withdraw its opposition to the petition and accede to implementing it.

Please help us send a clear message from Jewish spiritual leaders throughout the word.

Full text of the letter:

In 2005, over four hundred rabbis wrote an open letter to then Prime Minister Sharon expressing concern about the administrative demolition of Palestinian homes. We are extremely disapointed that the Government of Israel is opposing a High Court petition offering a constructive solution for alleviating this issue. Please use your authority to end this opposition.

Part of the 2005 letter read: "The homes that were demolished were not demolished for any security reason. None of the people in these homes engaged in violence or harboring terrorists. They were demolished because of a violation of zoning regulations in a context where it is almost impossible for Palestinian families in those parts of the West Bank under Israeli civilian control or in Jerusalem to legally obtain building permits… " The context referred to was the fact that planning and zoning laws severely restrict the ability of Palestinians to build homes, even on the lands that the State recognizes as belonging to them. There has been no representation or true ability for Palestinians to determine how to properly plan for their communities since local and district planning committees were abolished in 1971. The army plans for them.

Back in the 19th century, Rabbi Shimshon Raphael Hirsch warned in his Torah commentary about the disastrous consequences when, even with the best of intentions, those with the power in their hands try to appropriate for themselves the task of determining how to be just to others. The current discriminatory planning process exemplifies this, and violates the Jewish prohibition against acting " איפה ואיפה ."

Civil Administration (Army) planning officials have acknowledged that they don't really have the ability to adequately plan for Palestinian communities. Currently, the failure of the existing system is clear. Thousands have been forced to build without permits, and great human suffering is caused when hundreds of homes are demolished each year in Area C alone.

We are therefore disappointed that the Government of Israel has decided to oppose the High Court petition submitted by Rabbis For Human Rights and partner organizations to restore local planning committees. In the hearing on the petition on April 28th of this year, the judges said clearly that the current situation is unacceptable, and gave the State ninety days to come up with a proposal to truly involve Palestinians in planning their communities. While the judges indicated that they would not force the State to restore the local and district planning committees cancelled by military order in 1971, they indicated that there was no legal reason for the State not to do so.

However, the State's response was a proposal to institutionalize consultations that are already taking place in many cases. These consultations have not significantly altered the situation because the Civil Administration has no obligation to take into account what they hear. We also saw in the spring that consultations were suspended in response to moves by the Palestinian Authority.
Human rights must not be politicized. The State of Israel has an obligation to ensure that every human being under her control, each created in God's Image, has a fair chance to build a home for him/herself and his/her family, irrespective of the current state of the peace process or differing opinions about what areas will be under Israel's control in a future final status agreement. We urge the State of Israel to withdraw its opposition to RHR's petition.

**TO SEE THE FULL TEXT OF THE 2005 LETTER AND VIEW THE SIGNATORIES PLEASE COPY AND PASTE INTO YOUR BROWSER THE FOLLOWING LINK: http://bit.ly/2005rabbipetition