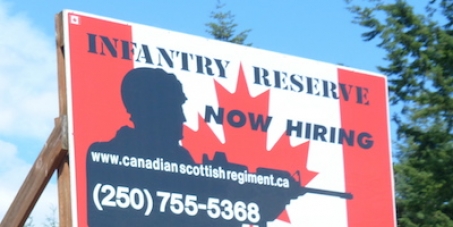 Prime Minister Stephen Harper, Minister of Defense Robert Nicholson: We call on you to take down this recruitment board.

By continuing you agree to receive Avaaz emails. Our Privacy Policy will protect your data and explains how it can be used. You can unsubscribe at any time.
This petition has been created by Kim L. and may not represent the views of the Avaaz community.

Sign this petition
Kim L.
started this petition to
Prime Minister Stephen Harper, Minister of Defense Robert Nicholson and the Canadian Scottish Regiment
We, the undersigned, call for the removal and retraction of recent ads superimposing the silhouette of soldiers with rifles over the Canadian flag, as we believe these ads link armed aggression with our flag in a dangerous way. Two posters with this image are currently displayed on the Department of Defense land in Nanaimo, B.C.

We ask that you take this image down and replace it with one which reflects the stated goals of The Canadian Scottish Regiment (Princess Mary's), namely, “to meet the realities of the “Three Block War” – combat fighting, peacekeeping, and humanitarian support.” We wish to see the roles of peacekeeping and humanitarian support emphasized in recruitment advertising, rather than solely combat fighting as represented on the current poster. Images such as this shadow of a soldier aiming his assault weapon overlaid on the Canadian flag can create an association in our minds linking Canada with offensive combat power, which we hope would be used only as a last resort by our recruits and reservists.

We are concerned for the cultural identity of Canada as a peaceful nation. Who are the Canadian Scottish Regiment trying to attract by using this image? On the same military land there is a poster of a massive gun. The implied message is that a reservist can enlist to shoot guns at people for Canada.
Many people in Canada and abroad may be influenced by this message to see Canada as an aggressive, militaristic society. This view will endanger our peaceful way of life, our democratic values and our safety.

We would like this image to be removed or replaced, as we feel it does not reflect our Canadian values. We are disturbed to have this image in our community and feel that it sends a horrible message to the world, and in particular to our children.