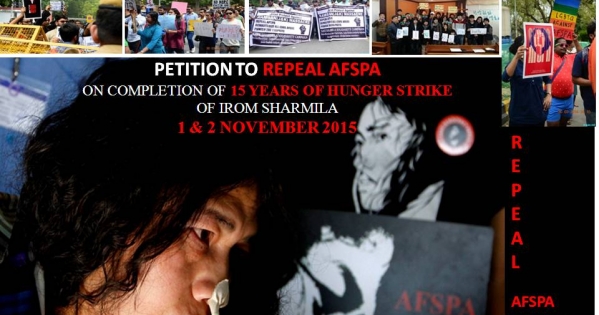 I rom Sharmila, a woman from Manipur is completing 15 years of her hunger protest on 2nd Nov. She is observing fast as a form of protest since the year 2000 (when she was about 28 years old), and she had started it just after Malom massacre where Assam rifles had fired upon local civilians who were waiting at a bus stand in Malom, Imphal (Manipur) and all were killed. Irom decided to register her protest because incidents of torture and killings were common in Manipur and in the veil of the powers under AFSPA, nothing could be done against culprit security personals.

Irom sharmila started her fast and did not leave it since then. She has only demand, Repeal AFSPA, as it is AFSPA that is main culprit , because it provides extra ordinary powers to security personals to operate in Manipur and other such areas and these powers have been misused widely.

AFSPA has provisions of shoot to kill mere on probability, but it does not stop here, instead it goes beyond and says that no case can be lodged against any security personals without pre sanction from central government.

Sadly, in all such years, no approval was given by central government and despite hundreds of reported cases of fake killings, torture and rapes, nothing could be done to punish culprits.

As, Irom Sharmila did not leave her fast, Manipur police registered a case against her under section 309 of ‘attempt to suicide’ and put her in jail. During her release from jail for a day in 2006, Irom Sharmila came to Delhi, paid tribute to Mahatma Gandhi at Rajghat and later joined a fast at Jantar Mantar. Delhi Police also registered another case under same section of attempt to suicide here in Delhi and matter went to court.
Presently, Irom Sharmila is under arrest by Manipur police and living her life in security ward of JLN hospital of Manipur.  The case in Delhi also, is still going on and Irom Sharmila appears before Delhi court on court notices and when Manipur government becomes ready to produce her at Delhi.

AFSPA, is a legislation that contributes to the overall impunity framework in states where it is enforced. National bodies including Justice Jeevan Reddy Committee; the Second Administrative Reforms Commission; and the Prime Minister's Working Group on Confidence-Building Measures in Jammu and Kashmir concur with our opinion. These expert bodies have recommended your office to advice the Government of India to repeal AFSPA. The experts have categorically mentioned that a law like AFSPA will only facilitate violence and will not prevent it.