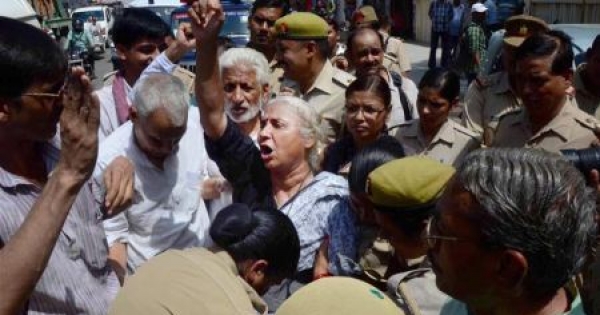 Sign this petition
Kamayani M.
started this petition to
Prime Minister of India , Chief Minister Madhya Pradesh
There have been series of incidents of state repression in the Narmada Valley, over the past month, especially the forcible ‘hospitalization’ and illegal detention of Medha Patkar and other oustees on 7th August, following a massive police action at the Chikalda Satyagraha and subsequent arbitrary jailing of Medha by foisting baseless charges, including that of ‘abduction’. The brutal lathicharge on hundreds of oustees at Chikalda left about 45 persons injured including a 15 year old girl.

The arrests of villagers‐activists Durji S/o Balya (Village Nisarpur), Devandra alias Santu S/o Ambaram (Village Nisarpur) and Vijay S/o Bharat (Village Khaparkheda), on the basis of severe charges including ‘attempt to murder’ is also yet another way to repress people’s struggle. In the past one week a large number of FIRs have been filed against key activists of NBA. On the other hand,the proceedings before the criminal courts is also quite alarming, especially the manner in which the State Govt. is seeking Medha’s externment from the submergence areas, as a ‘pre‐condition’ for her bail. All of this is absolutely malevolent and clearly shows that the State is going all‐out to crush the peaceful movement of the Sardar Sarovar oustees.

The people of the valley are waging a relentless and courageous battle against an insensitive State. Even yesterday, about 5,000 oustees, mostly women, stormed the streets of Kukshi (MP) and Nandurbar (Maharashtra), along with hundreds of supporters across different cities in MP, demanding an end to this repression and lack of rehabilitation. While we acknowledge with gratitude, the hundreds of solidarity actions across the country and even beyond, in the past few months, we urge you to continue your solidarity in different forms at this crucial juncture of the struggle.

We call upon you all to immediately organize solidarity actions in your cities / towns / villages with the following two demands from the Govt. of Madhya Pradesh and Govt. of India&colon