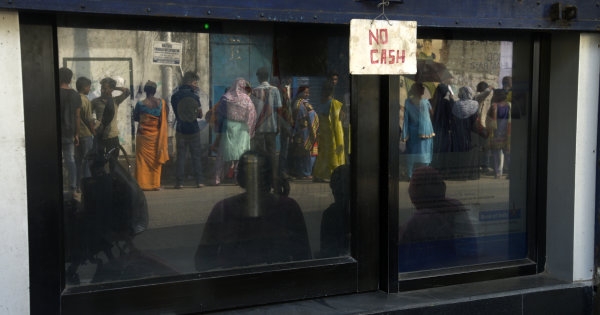 By continuing you agree to receive Avaaz emails. Our Privacy Policy will protect your data and explains how it can be used. You can unsubscribe at any time. If you are under 13 years of age in the USA or under 16 in the rest of the world, please get consent from a parent or guardian before proceeding.
This petition has been created by Satya S. and may not represent the views of the Avaaz community.
x

Sign this petition
Satya S.
started this petition to
Prime Minister of India
Mr. Modi, you need to take moral responsibility for the hundreds of people who have died as a direct result of your disastrous demonetisation scheme. All those who suffered heart attacks while waiting long hours in endless bank queues... Their blood is on your hands.

All the bank staff and employees who died under stress while on the job in the mad crush... Their blood is on your hands.

All the innocent victims ‐ farmers, artisans, daily wage workers ‐ who have committed suicide in despair over their lives being wrecked by the cashless existence you imposed on them... Their blood is on your hands.

And what about the millions of people who can no longer buy food or medicine for themselves or their children&quest How many tens of thousands of these will fall sick or die as a direct result of your suicidal policy&quest Their blood is on your hands.

Immediately after making your late‐night speech on November 8th banning 86 percent of India's currency, and plunging the nation into havoc, you waltzed off to Japan. That's ironic, because if Japan's top leader had inflicted on the Japanese people what you have inflicted on India's population, the Japanese premier would resign out of shame and guilt.

Yet you strut around, arrogantly defending your demolition‐job on India's economy and people, with self‐serving speeches that show no hint of remorse. You boastfully fantasize about a "cashless society" or a "digital economy"‐‐‐one which may happen twenty years from now, while hundreds of millions of people are suffering right now as a result of your rashly conceived note‐ban.

Mr. Modi, you need to resign immediately. You need to accept full moral responsibility for your reckless and immoral scheme. You have, indeed, an awful lot of blood on your hands.

Mr. Modi, your supporters have tried to shift the blame onto your top advisors‐‐‐the two or three cronies with whom you secretly shared your plan, unbeknownst to the Cabinet, the Parliament, or the people of India. Or else your apologists blame the Reserve Bank of India for poor planning. But you are the one person who hatched and carried out your disastrous demonetisation scheme by arbitrary decree. The fault for the monumentally poor planning rests entirely with you. Do not attempt to pass the buck, Mr. Modi. Resign.

Mr. Modi, your draconian currency‐ban scheme has failed abysmally by your own yardstick. In terms of productivity, the billions of man‐hours and woman‐hours lost‐‐‐as people wait in endless bank queues‐‐‐cancels out any gain from catching black money. Even your supporters are now starting to admit the gain will be modest at best, so they have shifted the discussion from black money to the brave‐new "digital economy", completely ignoring the reality on the ground as people suffer, businesses fail, supply lines dry up, shopkeepers shut down, and farmers perish.

Mr. Modi, you made an election promise that you would go after the big holders of black money who stash the cash overseas. But you never followed through on that campaign promise. Why&quest Would you end up catching your own financial backers and major donors to your BJP party&quest There are several methods available to reduce black money, but you did not utilize any of those methods‐‐‐instead you used a draconian, dictatorial approach, which is rapidly proving to be ineffectual while spreading massive misery, especially to the poor and working classes. One has to wonder if there was a hidden agenda to your seemingly insane scheme.

Regardless of that question, you need to resign. Because even if one life was lost through your folly, your demonetisation scheme would not be justified. And your scheme has already resulted in over 100 documented deaths, while uncounted millions of people no longer have cash to buy food for themselves or their children.

Own up to the human disaster you have single‐handedly created. Do the right thing, for the good of the country and your soul. Roll back the demonetisation immediately, and step down.