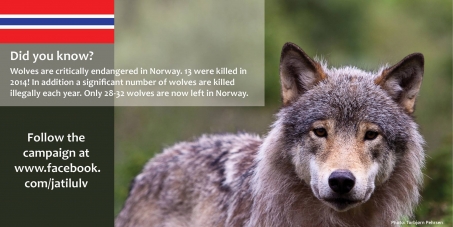 This petition is closed
50 Supporters
Bygdefolk F.
started this petition to
Prime minister, Erna Solberg and the Secretariat of the Bern Convention
Thanks to all of you, we reached 35.954 signatures and they were delivered to the Norwegian Parlament, Prime minister, Environmental minister and to The Bern Convention Committee. Will it manage to save the wolves? We don't know yet - but we hope that you all will keep up the pressure on the Norwegian government and Parlament - all in your own way.

Here you will always find NEW, IMPORTANT AND INTERESTING STUFF about our predators! Remember to tick the "Få varsler" by the "like" button to get alerts about new stuff on the page!

And last, but very most - THANK YOU FOR YOUR CONTRIBUTION and for being one of the close to 36,000 signers of the "Petition campaign for the wolf in Norway"! Thank you!

Petition text:
Please help us stop Norway’s plan to kill the last remaining wolves in Norway. In 2013 there were only 32 wolves left, and 12 were shot. In 2014 13 wolves were killed! In addition the scientists report that a significant number of wolves are killed through poaching each year. The recent estimate is that there is now between 28-32 wolves in Norway.There is no time to lose - Sign this petition to stop them hunting down our last wolves!

We want the political parties of Norway to know that their policy is utterly wrong and a gruesome one, which are not supported by the vast majority of the Norwegian population or by the world. We want them to realize that the wolves are important for the enviroment, and that the way they act now, is not the will of Norwegians, but a very small group of hunters and sheepfarmers. And we want them to change the law and the predator settlement (Rovviltforliket) the politicians are hiding behind now. Help us save the wolves from extinction!
---------------
Hjelp oss å stoppe Norges plan om å drepe de siste gjenværende ulvene i Norge. I 2013 var det bare 32 ulver igjen, og 12 ble skutt. I 2014 ble 13 skutt! I tillegg sier forskerne at et betydelig antall ulver drepes gjennom tjuvjakt, hvert år. Nylige estimat viser at de nå finnes mellom 28- 32 ulver i Norge. Det er ingen tid å miste – skriv under på denne underskriftskampanjen - for å stoppe dem fra å utrydde våre siste ulver!

Today: Bygdefolk F. is counting on you