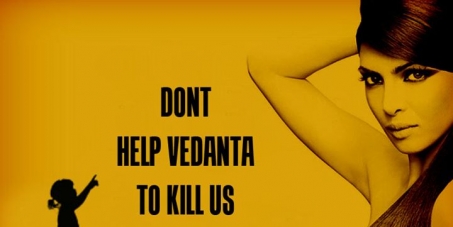 Sign this petition
Kamayani M.
started this petition to
Priyanka Chopra
Vedanta Resources, the controversial London-based mining giant accused of serious abuses at its sites in India, Allegations levelled at Vedanta regarding environmental damage and complicity in human rights violations, including abuse and forced eviction of tribal people, are well founded

Vedanta Resources have caused massive displacement which has led to the destruction of livelihoods and communities, deepening poverty, unemployment, insecurity and alcoholism - all factors which differentially affect women and girls. These factors also heighten violence against women and girls and leave them vulnerable to trafficking and sexual exploitation.

Vedanta's activities have also led to extensive poisoning of natural resources and pollution causing death and ill-health on a vast scale. As is well-known, pollutants are absorbed by infants and into the foetuses of pregnant women in high concentrations leading to serious ill-health and birth defects. In March this year a major gas leak at Vedanta subsidiary Sterlite's copper smelter in Tuticorin, Tamil Nadu choked thousands of local residents and allegedly caused one woman to have a miscarriage. At Vedanta's MALCO power plant in Mettur, Tamil Nadu, local women suffer continual breathing problems from pollution which rains down from the plant's cooling towers, as well as a major red mud dump just beside their homes. There have also been a number of pollution incidents which have left local people with allergies and lung problems.

It is not surprising that women have been at the forefront of concerted struggles against the company for many years. Vedanta has responded with violent repression. In April this year ten women and two two-year-old children who were with them were picked up by a Vedanta vehicle with police inside it, arrested on false charges, and kept in jail for one month and three days. These women were members of the Land Losers Association - a group who have protested their forced displacement for the refinery with no compensation.

Vedanta has harmed communities not only as a result of displacement and pollution and environmental destruction but also as an employer. In Vedanta's mines both men and women work in deplorable conditions for extremely low wages. Countless children's life chances have been affected by the deaths and serious injuries sustained by their parents who are workers in Vedanta's mines, factories and other processing operations.

Vedanta is one of the worst companies, but what’s most shocking is that it’s happening in the 21st century. This company is misleading the world with its incredible PR campaign.

The 'Our Girls, Our Pride' campaign is a desperate attempt to distract attention from Vedanta's crimes at a time when it stands exposed across India and internationally. Vedanta's interests are directly opposed to those of India, its people and particularly the girl children from poor communities it claims to be helping