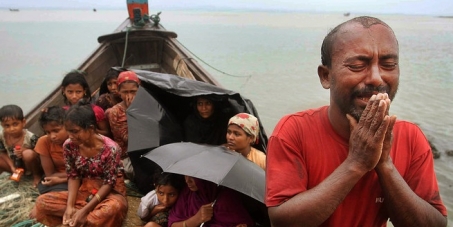 By continuing you agree to receive Avaaz emails. Our Privacy Policy will protect your data and explains how it can be used. You can unsubscribe at any time. If you are under 13 years of age in the USA or under 16 in the rest of the world, please get consent from a parent or guardian before proceeding.
This petition has been created by Mohamed R. and may not represent the views of the Avaaz community.
x

Sign this petition
Mohamed R.
started this petition to
Ban Ki-moon, UN Secretary-General
The violent persecution of Rohingya Muslims in Myanmar at the hands of Burmese extremists, the military, police and politicians is seeing thousands of people injured, displaced and killed. They require urgent protection, assistance and humanitarian aid -- and UN Secretary-General Ban Ki-Moon can call for an immediate resolution to protect them.

Security forces along with Rakhine Buddhist groups are looting and burning Rohingya properties under Act 144. Police and groups of Rakhine have started arson attacks, looting properties, destroying houses and killing the innocent Rohingya children, women and men. Some reports indicate that thousands of their houses have burnt down, over 1000 people have been killed, and more than 3000 wounded and thousands more rendered homeless.

When they sought asylum in neighbouring Bangladesh and Thailand, they were rejected.

The photos and stories coming from Myanmar are shocking. But the story has attracted little attention in the international media. But UN Secretary-General Ban Ki-moon can call for an immediate resolution to condemn these killings and send UN peacekeepers to protect them. Sign the petition now!

Today: Mohamed R. is counting on you