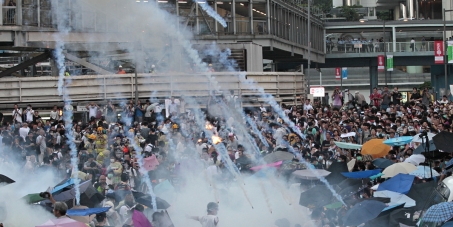 Stand with Hong Kong for the possibility of Democracy

This petition is closed
50 Supporters
Scott C.
started this petition to
Zhang Dejiang, Chairman of the Chinese National People's Congress

"One Country, Two Systems", also officially translated as "One China, Two Systems", is a constitutional principle formulated by Deng Xiaoping, the Paramount Leader of the People's Republic of China (PRC), for the reunification of China during the early 1980s. He suggested that there would be only one China, but distinct Chinese regions such as Hong Kong, Macau, and Taiwan could retain their own capitalist economic and political systems, while the rest of China uses the socialist system. Under the principle, each of the three regions could continue to have its own political system, legal, economic and financial affairs, including external relations with foreign countries.

The transfer of sovereignty over Hong Kong from the United Kingdom to China, referred to as "the Handover" internationally or "the Return" in China, took place on 1 July 1997, and marked the end of British rule in Hong Kong.

"One Country, Two Systems" was the promise made by China, but this has been continually eroded as the years have gone by, with subtle (and not so subtle) changes in Hong Kong Law.

From the Joint Declaration signed by the governments of the United Kingdom and China concerning Hong Kong, December 1984:

The Government of the United Kingdom of Great Britain and Northern Ireland and the Government of the People's Republic of China have reviewed with satisfaction the friendly relations existing between the two Governments and peoples in recent years and agreed that a proper negotiated settlement of the question of Hong Kong, which is left over from the past, is conducive to the maintenance of the prosperity and stability of Hong Kong and to the further strengthening and development of the relations between the two countries on a new basis. To this end, they have, after talks between the delegations of the two Governments, agreed to declare as follows:

The current social and economic systems in Hong Kong will remain unchanged, and so will the life-style. Rights and freedoms, including those of the person, of speech, of the press, of assembly, of association, of travel, of movement, of correspondence, of strike, of choice of occupation, of academic research and of religious belief will be ensured by law in the Hong Kong Special Administrative Region. Private property, ownership of enterprises, legitimate right of inheritance and foreign investment will be protected by law.

Occupy Central with Love and Peace (OCLP) is a nonviolent occupation protest for universal suffrage in Central, Hong Kong that started on 27 September 2014. It had previously been scheduled to start in the second half of 2014.

The campaign was initiated by Benny Tai Yiu-ting (Chinese: 戴耀廷), Associate Professor of Law at the University of Hong Kong, in January 2013. He predicted that at least 10,000 citizens would join the protest to take over Central in July 2014 if the universal suffrage for the 2017 Chief Executive election and 2020 Legislative Council Elections would not be carried out according to the "international standards".

Observers noted that the occupy movement campaign would likely occur after Qiao Xiaoyang, chairman of the Chinese National People's Congress Law Committee, stated that chief executive candidates were required to love both the country (China) and Hong Kong, and not confront the central government, effectively excluding candidates from the opposition pro-democracy camp. This was confirmed on 31 August 2014 when the NPC stated that the election for the chief executive of Hong Kong SAR being part of China would, in effect, be restricted to the candidates supportive of the Chinese central government.

On the evening of 28th September 2014, Peaceful Protests took a turn for the worse with the Hong Kong Police Force, in full riot gear, being ordered to disperse protestors using tear gas, pepper spray, and rubber bullets.

The 29th September has thankfully been a day of peaceful protests with tens of thousands of people continuing to take to the streets and the police refraining from using brute force or chemical weapons to disperse people - it seems now that with all the worlds eyes on Hong Kong, that the Government may wish to appear more tolerant? But how long will that last? China doesn't exactly have a great history of tolerating dissent......

Please take a stand with all of us in Hong Kong for our right to Democracy, and to be free from the oppression of the Chinese Government.

We, the people of Hong Kong, do not have the power alone to stand against the might of China. Our local Government is failing us. The only chance we have is for the WORLD to STAND WITH US and pressure China to relinquish it's stranglehold on Hong Kong politics.

With everything that is going on in the world today, with such a high degree of information overload, it would be all too easy for this movement to become just another 'flash in the pan' occurrence that slips into 'yesterdays news'. PLEASE DO NOT LET THAT HAPPEN. WE NEED TO KEEP UP THE MOMENTUM AND RALLY BEHIND THIS. LETS SHOW NOT ONLY CHINA, BUT ALL THE GOVERNMENTS OF THE WORLD THAT THE PEOPLE STILL HAVE A VOICE, AND WE WILL BE HEARD........WE WILL NOT BE OPPRESSED. TAKE ACTION NOW.


The freedom of Hong Kong's citizens and residents is slowly but surely being stripped away while the Beijing Government continues to suppress and censor information within Mainland China as 'managing domestic opinion about the unrest has become a top priority for top party leaders, who fear that the spread of pro-democratic sentiment on the mainland could loosen the party’s grip on power.'

Please, sign the petition for DEMOCRACY, and please share this with ALL of your friends and family via Facebook, Twitter, email, and any other means of communication that will reach a wide audience. EVERY SIGNATURE COUNTS. WE CAN MAKE A DIFFERENCE.

THE AVAAZ MOVEMENT ALONE HAS MORE THAN 38,000,000 members worldwide, so if we can get AVAAZ to take on this campaign, we could get get signatures in the TENS OF MILLIONS.

Thank you for your support!

Today: Scott C. is counting on you

Scott C. needs your help with "Stand with Hong Kong for the possibility of Democracy". Join Scott C. and 1,662 supporters today