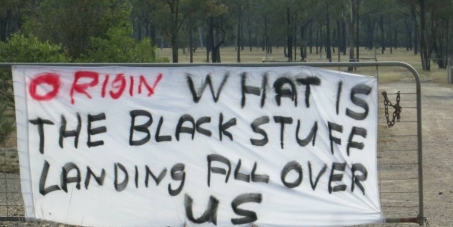 By continuing you agree to receive Avaaz emails. Our Privacy Policy will protect your data and explains how it can be used. You can unsubscribe at any time. If you are under 13 years of age in the USA or under 16 in the rest of the world, please get consent from a parent or guardian before proceeding.
This petition has been created by Robert R. and may not represent the views of the Avaaz community.
x

Sign this petition
Robert R.
started this petition to
Premier Campbell Newman
Since August 2nd, 2013, residents across the road from Origin Energy's "Ironbark" coal seam gas Project near Kogan, Western Downs, Queensland, Australia, have been showered continuously by an unknown toxic black substance emanating from the project site. The mystery substance, which has so far rained down over thousands of acres, contaminating bushland, farmland and domestic water supplies, is accompanied by feelings of nausea, skin and eye irritation, and chronic lethargy. Despite repeated complaints to Origin Energy and several departments of the Queensland State Government, so far the only officials to have approached the residents about this problem are the local police, wanting to know if the residents are going to stage a protest. Origin Energy must either cease operations at "Ironbark" until the toxic black rain can be eliminated, or move local residents out of the hazard zone immediately at company expense.
Report this as inappropriate
There was an error when submitting your files and/or report.
Inaccurate Inappropriate language Hate speech Illegal Commercial/spam Offensive
×

Today: Robert R. is counting on you