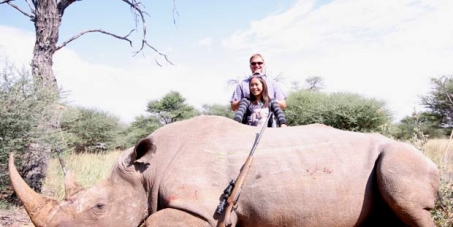 By continuing you agree to receive Avaaz emails. Our Privacy Policy will protect your data and explains how it can be used. You can unsubscribe at any time. If you are under 13 years of age in the USA or under 16 in the rest of the world, please get consent from a parent or guardian before proceeding.
This petition has been created by Allison T. and may not represent the views of the Avaaz community.
x

Sign this petition
Allison T.
started this petition to
THE NATIONAL PROSECUTING AUTHORITY, SOUTH AFRICA
The South African rhino horn syndicate case involving game farmer Marnus Steyl, professional hunter Harry Claassens, and Thai nationals Chumlong Lemtongthai, Punpitak Chunchom, and Tool Sriton came to a close on Friday 9th November 2012 with charges being withdrawn against Mr Marnus Steyl and a guilty plea was entered by Chumlong Lemgtonthai. We believe that despite the 40 year sentence that Mr Lemtongthai received that justice has not been served by the withdrawal of charges against Mr Steyl. 26 Rhinos were killed for the purpose of getting the horns onto the illegal rhino horn market in Asia.

Below is a link to disturbing video footage of just of 1 of the 26 Rhino that were killed in a so-called "legal" rhino trophy hunt, carried out at the behest of an international wildlife trafficking syndicate: