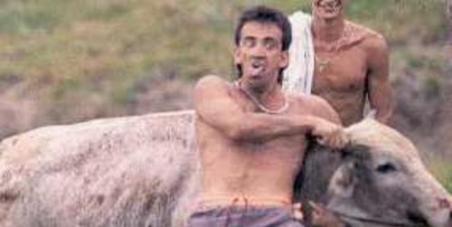 By continuing you agree to receive Avaaz emails. Our Privacy Policy will protect your data and explains how it can be used. You can unsubscribe at any time.
This petition has been created by Norah A. and may not represent the views of the Avaaz community.

Sign this petition
Norah A.
started this petition to
Supremo Tribunal Federal, Procuradoria Geral da República, Ministério Público de Santa Catarina, Governo de SC, Secretaria de Turismo de SC, ALESC
Although outlawed by decision of the Supreme Court of Justice __n.o 023.89.030082-0, as decided after a civil lawsuit __ in 1997, this brazilian version of bull torture still goes on every year in the brazilian state of Santa Catarina, as an "heritage" of ancient costumes of the imigrants from the Açores.
Bulls are beaten, are tied with ropes,have rocks thrown on them, pepper is thrown in their eyes, a gathering of people runs after the animals and attacks them with pieces of wood , knives,
Sometimes they are set on fire intentionally
They either drown, if they are able to reach the sea, in order to escape, or may be reached in land, invading the streets,where torture goes relentlessly on.
The police seems uncapable or unwilling to stop this crime, year after year. This happens mostly at the Holy Week.
The animals are usually kept alive for days, before being murdered by the crowd.
Please BOYCOTT TOURISM until this is conveniently repressed by the local police.
Exigimos providências efetivas neste sentido do poder público.
E que os "farristas" que chegam a ser presos não sejam imediatamente liberados, como acontece sempre.
Report this as inappropriate
There was an error when submitting your files and/or report.
Inaccurate Inappropriate language Hate speech Illegal Commercial/spam Offensive
×

Today: Norah A. is counting on you

Norah A. needs your help with "REPRESS the outlawed BULL TORTURE ongoing in Brazil: FARRA do BOI in Santa Catarina". Join Norah A. and 13304 supporters today