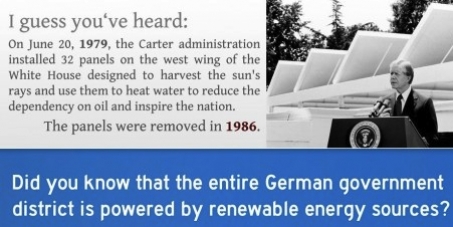 By continuing you agree to receive Avaaz emails. Our Privacy Policy will protect your data and explains how it can be used. You can unsubscribe at any time. If you are under 13 years of age in the USA or under 16 in the rest of the world, please get consent from a parent or guardian before proceeding.
This petition has been created by Arun F. and may not represent the views of the Avaaz community.
x

Barack Obama promised to reinstall solar panels on the White House roof, but he has not yet fulfilled his pledge.
Ronald Reagan took them down in 1986, after Jimmy Carter had them originally installed, and the White House said new ones would be put up. President Obama now has another four years in the White House, more than enough time to honor his commitment. http://www.whitehouse.gov/blog/2010/10/29/solar-panels-white-house-and-desert-36-billion-gallons-biofuels-and-cleaner-trucks

The United States of America could, and should, be a world leader in the adoption and promotion of sustainable, renewable resources. If Germany supplies 10% of its power through solar panels, why can't the USA? What is stopping the White House from setting an example for the rest of the country?

It is time stop being in denial about climate change, and time to start doing something about it. Please stand by your word, Mr. Obama. The American citizens, and the rest of the world, are waiting.

For more information regarding climate change doubt and the history of removing the panels, please watch the following documentary (and inspiration for petition): http://www.pbs.org/wgbh/pages/frontline/climate-of-doubt/