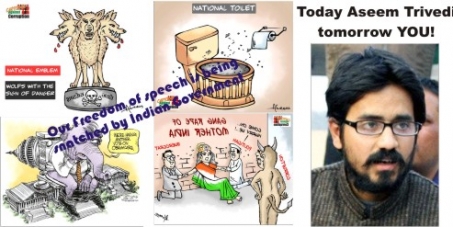 By continuing you agree to receive Avaaz emails. Our Privacy Policy will protect your data and explains how it can be used. You can unsubscribe at any time. If you are under 13 years of age in the USA or under 16 in the rest of the world, please get consent from a parent or guardian before proceeding.
This petition has been created by Manu M. and may not represent the views of the Avaaz community.
x

Sign this petition
Manu M.
started this petition to
Government of India, Government of Maharastra, Mumbai Police, R.R. Patil, Home Minister, Maharashtra
Every Citizen has a right to FREEDOM OF SPEECH, Now the Dictators of Indian Government are snatching this right. . !!!
Raise the VOICE Against this. . .Aseem Trivedi was exhibiting his political cartoons in the anti-corruption protest at the MMRDA grounds, when his website:www.cartoonsagainstcorruption.com was suspended by Crime Branch. He is a founder member of Save Your Voice, a movement against internet censorship in India
On 30th August 2012 Mumbai police visited his home town in Kanpur and took his father for questioning as he was away in Delhi. they had a non bailable warrant against Aseem. When he head of this he called Mumbai Police and volunteered to come to Mumbai at the earliest. He was shocked and dismayed that the police had chosen to make this surprise visit with a non bailable warrant against him and cause great humiliation to his family and loved ones.
On 08 Sept 2012 he himself came to BKC police station and was arrested. He is still unsure of exactly what his crime is. He has been told that complaint was filed by one Amit Arvind Katarnoure and he is booked under Section 124 for Sedition - an archaic law made by our colonial masters now being used by our corrupt masters. He is also charged with section 66 A of the IT Act and the 1971 National Emblem Act. He has been arrested and detained at a police lock up in Bandra West and will be produced in a Holiday Court at Bandra Family Court Room No 9 and 11 am on Sunday 9th September.
He says he is has nothing to say in his defense; in fact he prefers to be jailed then live in farcical freedom where laws are targeted at activists and our fundamental right to freedom of speech is denied.
He can be contacted on +919717900302. His colleague Alok can be contacted on +919336505530
First Indian Govt. came for the Activists fighting for the Nation, and I didn't speak out because I wasn't a Activist.
Then Indian Govt. came for the Social Networking Activists, and I didn't speak out because I wasn't a Social Networking Activists.
Then Indian Govt. came for the Cartoonists, and I didn't speak out because I wasn't a Cartoonists.
Then they came for me, and there was no one left to speak out for me.

Today: Manu M. is counting on you