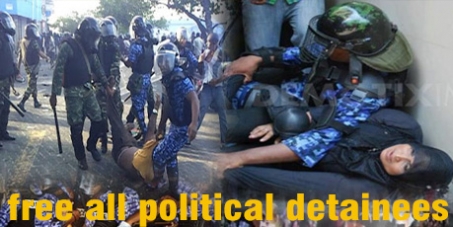 This petition is closed
50 Supporters
Thilmeeza H.
started this petition to
World Leaders
In 2008, in the first-ever multiparty elections, voters ended three decades of autocratic rule by Maumoon Abdul Gayoom. An era marked by dark days and jet black nights when people were held in prisons for a long-term without any court ruling, inmates were given penalties out of the court rulings, and prisoners were subjected to inhumane torture including female prisoners being gang raped. Now the Maldives sadly sees its democratic gains being rolled back: a leader elected through the ballot box has just been deposed by a coup.

During the three short years from 2008 to 2012 February Maldives made remarkable progress on improving its Human Rights standards that it won a seat on the Human Rights Council. But today we see these very rights being infringed, today Maldives is again a "Human Rights Pariah" with systematic undermining of political and civil rights. Hundreds of pro-democracy supporters have taken peacefully to the streets in recent days, calling for early elections and the restoration of democracy. The police have responded violently, baton-charging demonstrators, using pepper spray and reportedly firing rubber bullets at unarmed protesters. Over hundred protesters have been arrested, with some accusing the police of abuse during arrest and detention.

Despite of these set backs brave young Maldivian men and women are rallying daily, insisting on early elections, the only possibility of holding onto the hard won democracy.

"We will continue to put pressure on the current regime - join us and help make it happen, support us in getting the message to the world leaders to act"

Today: Thilmeeza H. is counting on you