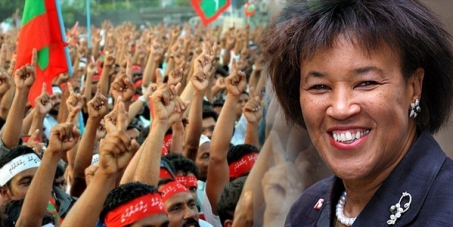 Request the return of the money taken by Baroness Scotland back to the Maldivian people.

THIS PETITION HAS BEEN DELIVERED. MANY THANKS TO ALL WHO SIGNED. CHECK HERE FOR MORE UPDATES, WE WILL KEEP YOU INFORMED.

In February 2012, the first democratically elected president of the Maldives, Mohamed Nasheed, was replaced by his then vice president Waheed Hassan, following a police mutiny. Although portrayed as being constitutional, the events leading to this unconventional transfer of power still remain dubious and questionable.

Initial calls by the Commonwealth, US State Department, the European Union, and India to establish a transparent and impartial inquiry to determine the legitimacy of the new regime were brushed aside, including statements from its leader Waheed Hassan that there is ‘no compelling reason’ for them. Since then the outlook for democracy in the Maldives has deteriorated, with the arbitrary arrest and unconstitutional detainment of many pro-democracy activists. Police brutality and other human rights abuses committed since then, have been strongly condemned by the UNHRC, which, to date, hasn’t been addressed by the current government.

Bending to pressure primarily from the Commonwealth Ministerial Action Group (CMAG) a Commission for National Inquiry was eventually established. But in the meantime, the new regime sought help from the global PR firm Ruder Finn to help them whitewash the alleged coup and to undertake an international campaign to legitimise the regime and undermine attempts to restore democracy. All this at a cost to the Maldives of US$150,000 (£96,000) per month (£1.15 million or Maldivian Rufiyaa 28 million annually).

Recently following journalistic research by the Daily Mail, it has come to light that the former Labour Cabinet Minister and ex-Attorney General, Baroness Patricia Scotland of Asthal had been paid £75,000 for two weeks, to advice the Maldives regime on how to avoid further actions by the Commonwealth. It is a shameful and deplorable act by an ex-Attorney General and Labour Party member, to accept such money in advising a regime that has been accused of torture, with no widely accepted democratic mandate and who’s legitimacy still remains unspecified. Moreover, the dealings worth Maldivian Rufiyaa 1.8 million is a significant amount of money for a country, which is still relatively poor, with a per capita GDP of £5,500 and who’s citizens recently lost their public health insurance scheme under the new regime.

This money if returned to the Maldivian people, can:-

- provide health insurance for 700 citizens for a year

- cover the annual local school expenses of over 500 students

- contribute to sewage and harbour projects on islands that desperately need them.

Therefore we ask as many people to support this cause and petition to the Labour Party to do everything possible to request Baroness Scotland to return this money to the Maldivian people who truly deserve and desperately need it.

Today: Shifaan T. is counting on you

Shifaan T. needs your help with "Request the return of the money taken by Baroness Scotland back to the Maldivian people.". Join Shifaan T. and 878 supporters today