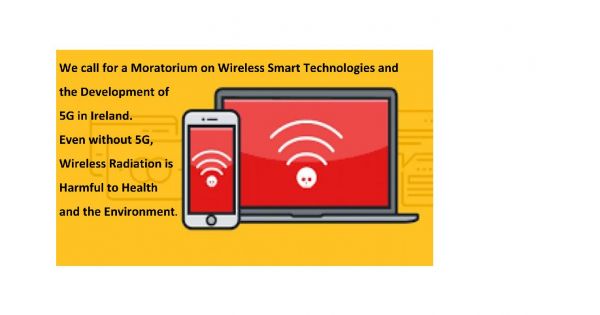 By continuing you agree to receive Avaaz emails. Our Privacy Policy will protect your data and explains how it can be used. You can unsubscribe at any time. If you are under 13 years of age in the USA or under 16 in the rest of the world, please get consent from a parent or guardian before proceeding.
This petition has been created by Melanie B. and may not represent the views of the Avaaz community.
x

The limits of exposure in Ireland are those compiled in 1998 by ICNIRP, whose guidelines are based on short-term exposure and thermal effects only. These guidelines were voted “out of date”  & “obsolete” by the European Parliament in 2008.  They do not adhere to the Precautionary Principle.

Clear evidence of harm at non-thermal levels has been found in numerous scientific studies undertaken by independent respected scientists. The BioInitiative Summary for the Public (2014 Supplement) (2)   based on over two thousand peer-reviewed studies   provides an insight into the potential adverse health effects of RF/EMF at non-thermal levels.

The Government has chosen to ignore the conclusions of thousands of studies, as well as important EU Parliament recommendations such as Resolution 1815 (2011)  on ‘ The potential dangers of electromagnetic fields and their effect on the environment’.  (6)