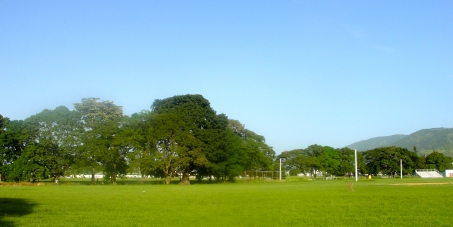 By continuing you agree to receive Avaaz emails. Our Privacy Policy will protect your data and explains how it can be used. You can unsubscribe at any time.
This petition has been created by Carol J. and may not represent the views of the Avaaz community.

Sign this petition
Carol J.
started this petition to
Mrs Kamla Persad Bissessar, Prime minister of Trinidad and Tobago
Government plans to build a covered multi-sport complex of paved asphalt areas and covered buildings on 39 acres of flat grassland in Tacarigua. This land represents the remnants of a larger natural savannah that provides key ecological and social services to 30 % of the island's 1.2 million people. It is considered by the 1500 daily recreational and sport users, and others in the country, as crass and senseless abuse of scarce land in a tiny island of just under 2000 square miles.

The project is well advanced without community consultation. When residents 'happened upon' information on 9 July 2013, their attempts to seek clarification and negotiate a compromise for re-location to abandoned sugarcane lands across the highway on the outskirts of the densely populated community, were met with hostile responses from the Minister in charge on 3 September 2013 that "the project is too advanced to be stopped and will not be stopped. It is going full speed ahead".

The community of active users which include 6 cricket clubs, 4 track and field clubs, hundreds of informal walkers, joggers, kite fliers, bikers, golfers, aerobics enthusiasts, outdoor physical education grounds for 10 area schools without sports facilities, model plane fliers, were naturally outraged. Within days, over 1000 signatures were collected on petition letters. This did not sway officials who apparently initiated clearing of land, carting away priceless topsoil, which took hundreds of years to be created. State officials denied any knowledge, yet this travesty happened in full view of all and sundry. Community voices raised concerns and further clearing has been halted, we believe only temporarily, as two truck loads of low-grade waste quarry material has been dumped on the clearing.

This tiny oasis of green in a desert of concrete, steel and asphalt serves a population of approx 250,000 with water from 11 wells located around its periphery. It traps runoff from distant forested hills and also collects surface run-off, minimizing flooding to surrounding residential communities. Investigations revealed that no Certificate of Environmental Clearance, which is legally required under the Environmental Management Act, has been obtained, neither has official clearance from the Water and Sewerage Authority which owns and services the 11 active wells. Thus, failing these legal undertakings, the social and environmental impacts upon the communities that this land serves, had not been investigated prior to the Government's decision to move forward.

The alternative site suggested by the community represents a realistic solution that would allow for a more comprehensive sporting facility with a 50 m swimming pool as opposed to the 25 metre pool proposed for the community space. It would also allow access to more of the country’s sporting population without impacting negatively upon the existing Tacarigua community; it would eliminate the threat of increased flooding for which surrounding communities are occasionally subjected due to past paving over, and, most crucially it would enable the community of greater Tacarigua and beyond to continue enjoying the only community 'breathing space' for fostering human well-being, through formal and informal sport and recreation.

Positive social interaction is a way of life because of this savannah and crime is minimal due the role of this space in allowing many young people to 'let off steam' as one community elder who enjoyed that space for the past 53 years, put it. Such continuous use of this precious Orange Grove Savannah has been recorded formally for over 150 years.

Today: Carol J. is counting on you