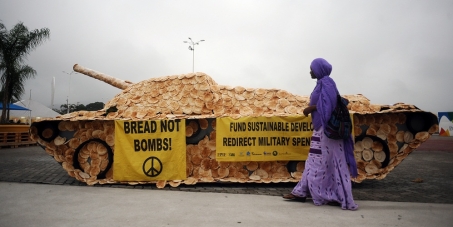 Sign the Appeal launched at Rio+20: Disarmament for Sustainable Development

By continuing you agree to receive Avaaz emails. Our Privacy Policy will protect your data and explains how it can be used. You can unsubscribe at any time.
This petition has been created by Pol H. and may not represent the views of the Avaaz community.

Every 3,5 seconds a human being dies of hunger. Every 6 seconds this human being is a child under 5. And billions of our brothers and sisters have no access to safe water, adequate health care and education, not to speak about the environmental problems that challenge our times.

The solution is simple. According to the World Bank, less than 5% of the current yearly military expenditure would already be enough to reach the Millennium Development Goals, including putting an end to extreme poverty and hunger.

Military expenditures reached unprecedented levels and almost doubled since Rio92, from US$ 1,08 trillion in 1992 up to US$ 1,74 trillion in 2011, Let`s join hands and put an end to this criminal system.

During the Rio+20 Summit a life-sized Tank covered with Bread called attention for governments to redirect 10% of the global annually military expenditures to fight hunger, eradicate extreme poverty, provide better education and healthcare, and to fund urgent environmental programs.

This campaign launched at Rio+20 was an initiative of the International Peace Bureau (IPB), the International Network of Engineers and Scientists for Global Responsibility (INES), Foreign Policy in Focus (FPIF), the World Future Council (WFC), Viva Rio, Mayors for Peace, and World without Wars and Violence.

Join the campaign! Rio+20 only marked the start. This petition will soon be updated with some `technical changes` to reflect this, while it will also be made available in Spanish, Portuguese, French, ...

Today: Pol H. is counting on you