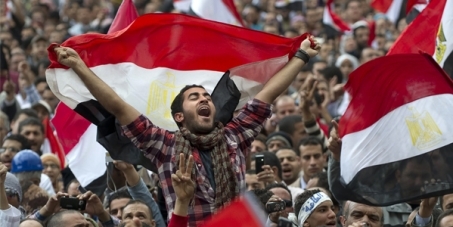 By continuing you agree to receive Avaaz emails. Our Privacy Policy will protect your data and explains how it can be used. You can unsubscribe at any time. If you are under 13 years of age in the USA or under 16 in the rest of the world, please get consent from a parent or guardian before proceeding.
This petition has been created by #SOSEgypt S. and may not represent the views of the Avaaz community.
x

On the 15th of November, only a week before President Morsi issued a dictatorial decree granting him immunity from law, the EU pledged €5 billion financial support to Egypt. This is European taxpayer’s money.

President Morsi is following the same policies of Mubarak in repressing his opponents, in just the first 100 days of his presidency; Egyptian police were behind at least 88 cases of torture, seven cases of sexual assault and the deaths of 34 people.(1) Outspoken media personalities are being intimidated (2) protesters violently attacked and killed (See video below), and religious freedoms constrained (3). In the absence of constitutional safeguards, violations of basic human rights and civil liberties may well get worse. Europe can't turn a blind eye to the abuses that the Egyptian government is responsible for.

Despite requests from European members of Parliament (4) and NGOs (5) the EU - to date- has not made clear how it will condition its support to the Egyptian government on the respect of internationally agreed human rights and liberties. The EU must monitor laws in the making, and condition development aid to the Egyptian government on the respect of rights and liberties, such as social justice, rule of law, gender equality, labour rights, as well as freedom of expression, freedom of religion and freedom of association.

Over the next months, laws made could further infringe on the rights of Egyptians. ACT NOW. Now is the time for the EU and its member states to show real change and stand side by side with the Egyptian people who are still fighting for their basic rights and freedoms. Young Egyptian men and women (6) have proven that they will not bow to oppression; the EU must join the right side of history. The old system of patronage with an oppressive regime should not be allowed to be repeated (7).

This petition will be handed to the EU on the 11th of February 2013 the 2nd anniversary of Mubarak’s ouster.

Support human rights. Support the rule of law. Support the people of Egypt. Do not allow the EU to support oppression. Take a minute. Sign the petition and share widely.

Today: #SOSEgypt S. is counting on you

#SOSEgypt S. needs your help with "#SOSEgypt - Save our Spring". Join #SOSEgypt S. and 928 supporters today