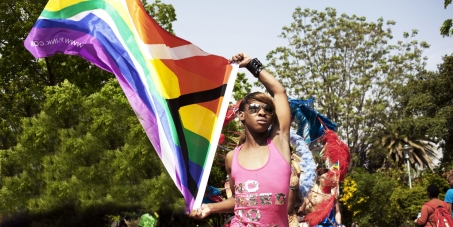 By continuing you agree to receive Avaaz emails. Our Privacy Policy will protect your data and explains how it can be used. You can unsubscribe at any time. If you are under 13 years of age in the USA or under 16 in the rest of the world, please get consent from a parent or guardian before proceeding.
This petition has been created by LGBTI C. and may not represent the views of the Avaaz community.
x

In May 2011, South Africa's Department of Justice set up an TEMPORARY Task Team to combat homophobic hate crimes comprising of representatives from Civil Society and Governmental Departments.

The mission was to discuss initiatives to raise awareness, intervene with traditional leaders and to research and review prosecution of homophobic violence, even potentially passing a HATE CRIMES BILL!

HOWEVER THE TASK TEAM AS A BODY HAS NEVER:

- released a statement on any major LGBTI issue, homophobic attack, rape or murder to broader LGBTI or South African communities

- published progress or status report since its formation.

WE MUST GET THE FOLLOWING PEOPLE TO MAKE USE OF THEIR POSITION!

The Gay Flag of South Africa, Funeka Soldaat of Free Gender (Lesbian Rape NPO) and Laurie Gaum an LGBTI Spiritual Leader are asking you to LEND YOUR SUPPORT!

WE DEMAND THAT THE TASK TEAM:

- set up channels of communication to broader LGBTI South Africa and South Africans in general.
- publish how to gain access to the Task Team for victims of
homophobic violence nor relevant NPO's.
- published and raised awareness of the status and progress of the Task Team.
- execute National or Regional caucuses as promised to:
-> escalate LGBTI community issues to government.
-> elect permanent Task Team Members.

HELP US HELP OURSELVES!

Today: LGBTI C. is counting on you