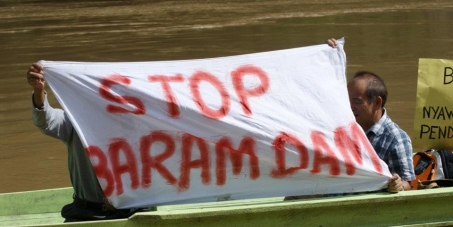 By continuing you agree to receive Avaaz emails. Our Privacy Policy will protect your data and explains how it can be used. You can unsubscribe at any time. If you are under 13 years of age in the USA or under 16 in the rest of the world, please get consent from a parent or guardian before proceeding.
This petition has been created by Cecelia A. and may not represent the views of the Avaaz community.
x

Sign this petition
Cecelia A.
started this petition to
Dato' Sri Haji Mohammad Najib bin Tun Haji Abdul Razak, Pehin Sri Haji Abdul Taib bin Mahmud, Dato' Sri Douglas Uggah Embas
The tropical rainforests of the Malaysian state of Sarawak on the island of Borneo are one of the world's biodiversity centres . One hectare of forest in Borneo harbours more tree species than the whole of Europe . For centuries, Sarawak's native communities have sustainably used the Borneo forest and its river systems for farming, fishing and hunting.

The current Sarawak government under its extremely corrupt Chief Minster, Abdul Taib Mahmud, is planning to build twelve hydroelectric dams , which would displace tens of thousands of people and flood large tracts of tropical rainforest . The dams would mainly benefit a handful of companies linked to the Taib family, which controls Sarawak's construction sector and holds a state-wide cement monopoly.

Officials claim the power generated from the dams will be used locally, but these are bare faced lies. Just the one dam already completed produces twice as much energy as the entire state uses at peak times! In reality, the power will mostly like go towards running polluting industry, like an aluminium smelter owned by Australian mining giant Rio Tinto – further degrading the environment and funneling money out of the country.

Billed as clean energy, hydroelectric dams in tropical countries have devastating impacts on our climate because of the green house gases released from the mass of rotting vegetation that comes with flooding such huge swaths of rainforest. Anyway you cut it -- from the destruction of indigenous communities and treasured rainforest, to furthering the climate crisis – the cost of the project is way too high and the benefits far too few.

The Murum Dam have started construction. Baram Dam and the others coming soon. Indigenous people are being displaced, covered with the lies of 'development' and 'free utilities'. Many displaced Batang Ai and Bakun dwellers have not received their promises from the government, even as far as their human rights being denied.

We are asking the Malaysian authorities to put a stop to the Sarawak dam plans immediately, since they would have drastic social and environmental consequences.

Sign the petition now and tell Malaysian authorities to put his people and the planet before dirty industry. Please help us build up international pressure against the Sarawak corruption dams.

We must stop all this before Sarawak turns into the next Atlantis.

Today: Cecelia A. is counting on you

Cecelia A. needs your help with "Stop Baram Dam & Save Sarawak Forest and River". Join Cecelia A. and 3,299 supporters today