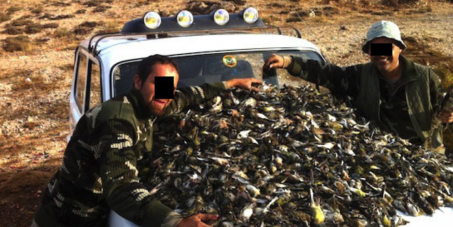 By continuing you agree to receive Avaaz emails. Our Privacy Policy will protect your data and explains how it can be used. You can unsubscribe at any time.
This petition has been created by Pierre D. and may not represent the views of the Avaaz community.

Sign this petition
Pierre D.
started this petition to
The Lebanese Government.,
Marwan Charbel (Lebanese Minister of Interior),
Najib Mikati (Lebanese Prime Minister),
Michel Suleiman (Lebanese President),
Shakib Qortbawi (Minister of Justice),
Ali Hasan Khalil (Minister of Health),
Fadi Abboud (Minister of Tourism),
Nazim Khoury (Minister of Environment
Millions of migrating birds are being massacred every season in one of the biggest migrating channels in the world: THE MOUNTAINS OF LEBANON, where these birds find their resting place before they continue to their destination. The Lebanese Government is busy with corruption and political issues, but they never care about implementing a hunting law. We need pressure on the Lebanese government to enforce a new law.
Report this as inappropriate
There was an error when submitting your files and/or report.
Inaccurate Inappropriate language Hate speech Illegal Commercial/spam Offensive
×

Today: Pierre D. is counting on you