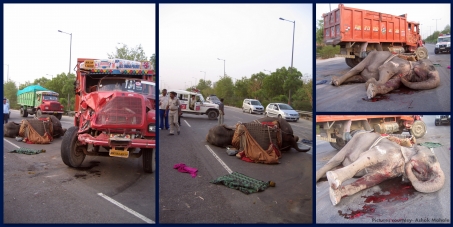 Stop Elephant abuse for processions and begging-blessings in India

By continuing you agree to receive Avaaz emails. Our Privacy Policy will protect your data and explains how it can be used. You can unsubscribe at any time. If you are under 13 years of age in the USA or under 16 in the rest of the world, please get consent from a parent or guardian before proceeding.
This petition has been created by CUPA B. and may not represent the views of the Avaaz community.
x

Sign this petition
CUPA B.
started this petition to
Ministry of Environment & Forest, State Wildlife Departments

5.30 am, Friday - June 29: The sun had just risen, when it set for an elephant in Noida. A speeding truck proved to be a KILLER for the 45-year-old INNOCENT female, while seriously injuring another. Both elephants lay HELPLESS on the road near Mahamaya Flyover for almost four HOURS. While the early-morning traffic gridlock on the busy stretch caused a fuss, NOBODY CARED about the loss of a precious life.

This was not the demise of just another animal.

It was a SIGNAL - a signal of how such elephants will continue to be used for begging as we throw pennies at their cuteness.
It was a SYMBOL - a symbol of how the same elephant that blesses us as Lord Ganesha, will be damned by our ignorance.
It was an INDICATION that how elephants that make our celebrations and weddings grand, will be left in mourning.

Do you want the AUTHORITIES to upkeep the elephants in the begging and travelling category?
Do you want their OWNERS to be PUNISHED for flouting laws which govern the welfare of animals?

If yes, then SPEAK UP. Compassion Unlimited Plus Action, Bangalore (www.CUPAbangalore.org) is writing to the Ministry of Environment and Forest appealing to end this menace and requests your support for this worthy cause. Tell your friends to SIGN this petition that will be tabled in front of India's government officials, pushing strict enforcement of laws banning the cruelty and abuse to India's elephants in captivity. You can post the petition to your Facebook profile, tweet it or copy and send the message above. END the illegal practice of allowing our precious elephants to be used as commodities for commercial transactions. NOW.

Today: CUPA B. is counting on you

CUPA B. needs your help with "Stop Elephant abuse for processions and begging-blessings in India". Join CUPA B. and 16,407 supporters today