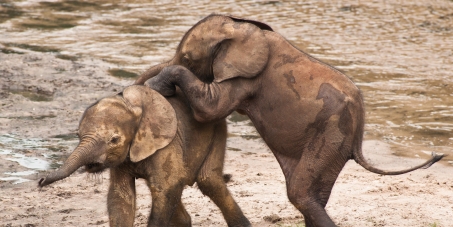 Dzanga Clearing is home to + 3,000 forest elephants. For the last 20 yrs the World Wildlife Fund (WWF) and World Conservation Society (WCS) have collaborated with the Central African government to build a program that protects wildlife and provides livelihoods for local people.

All is now in dire peril. The sounds of Dzanga clearing are now only gun fire and bellows of agony. WWF and the C A Army and Forest Ministry has previously fought away a criminal gang of Sudanese ivory poachers, who are now systematically slaughtering elephants at the clearing.

Conservation NGOs and UNESCO have called for the Central African authorities to urgently send in support to stop one of the biggest elephant massacres in recent history. WWF and partners are urging neighbouring countries and major international players, the US, China, and European Union to act quickly; to encourage and assist the Central African government.

By signing this petition you can help bring this massacre quickly to a halt.

Today: Friends O. is counting on you