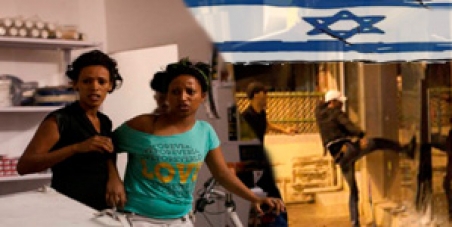 STOP the violence and mistreatment of Eritrean refugees in Israel

By continuing you agree to receive Avaaz emails. Our Privacy Policy will protect your data and explains how it can be used. You can unsubscribe at any time. If you are under 13 years of age in the USA or under 16 in the rest of the world, please get consent from a parent or guardian before proceeding.
This petition has been created by Hermon Y. and may not represent the views of the Avaaz community.
x

We're writing to you because the Eritrean community in the diaspora have seen alarming increases in the discriminatory treatment of Eritrean refugees in Israel. Such senseless hate fuelled in part by right wing politicians has led to Eritreans being attacked on the street and in their homes. Eritreans today are living in a general climate of fear in Israel. This has been further compounded by threats of deportation and the proposal to forcibly transfer them to a tent detention centre which will be the largest of its kind in the world once the construction has been completed.

The proposal is to hold them in such facilities for 3 years and if they can't be deported then they will be held indefinitely. Eli Yishai, the interior minister said it was "To Make Their Lives Miserable!"

It is imperative that Israel comply with the 1951 Refugee Convention and its 1967 Protocol, which it became a signatory to in 1954. We strongly urge the Israeli government to implement the following with urgency:

• Develop a fair Refugee Status Determination procedure that allows for each individual to apply for asylum and provides protection and support for refugees in line with all other Western democratic countries.

• Cease to build the massive detention centre in the Negev desert which is intended to arbitrarily imprison Eritrean refugees indefinitely.

Today: Hermon Y. is counting on you

Hermon Y. needs your help with "STOP the violence and mistreatment of Eritrean refugees in Israel". Join Hermon Y. and 1,828 supporters today