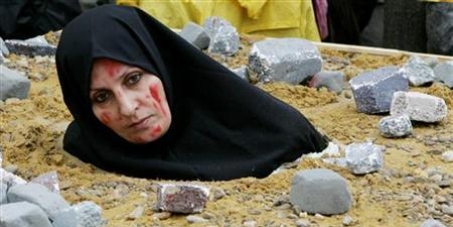 Save 20 year old Sudanese mother Sentenced To Death By Stoning

By continuing you agree to receive Avaaz emails. Our Privacy Policy will protect your data and explains how it can be used. You can unsubscribe at any time. If you are under 13 years of age in the USA or under 16 in the rest of the world, please get consent from a parent or guardian before proceeding.
This petition has been created by kracktivist A. and may not represent the views of the Avaaz community.
x

Intisar Sharif Abdallah was sentenced by Judge Sami Ibrahim Shabo at Ombada criminal court in Omdurman on 22 April on charges of adultery, under article 146A of Sudan’s criminal code.
Intisar was accused of having a relationship and becoming pregnant by a man who was not her husband. She was found guilty after an “admission of guilt” following torture and brutal beatings by her brother who instigated the case. According to reports, Intisar did not have access to a lawyer during her trial, and her accused lover remains un-convicted and walks free.

Intisar, who has three children, is being detained with her newborn baby. She is suffering from psychological distress and does not fully understand the nature of her sentence.It is incredulous that the man with whom she has been accused is able to walk free showing explicitly the strong anti-woman sentiment and harsh management of family disputes that exists within both the Sudanese judicial system and in society.

Stoning is an egregious abuse of human rights and in violation of Sudan’s international human rights commitments under the ICCPR. It also constitutes a form of torture and is often accompanied by gender discrimination and unfair judicial processes. Although stoning is often justified in the name of Islam, the use of stoning today is wholly un-Islamic and religiously illegitimate. There is no mention of stoning in the Quran and many Muslim clerics, religious scholars, and political leaders have spoken out against the practice of stoning.

I demand that Intisar Sharif Abdallah be released immediately and unconditionally. I also call upon you to conduct an honest and thorough investigation into the case and correct all breaches in the judicial process.

You must reform the penal code. Stoning must never again be considered as a legitimate punishment for any crime.The freedom of belief does not constitute the freedom to kill. No excuse—including in the name of ‘religion’, ‘culture’, or ‘tradition’—justifies any form of violence against women whether by the State or by private individuals or groups.

Today: kracktivist A. is counting on you

kracktivist A. needs your help with "Save 20 year old Sudanese mother Sentenced To Death By Stoning". Join kracktivist A. and 406 supporters today