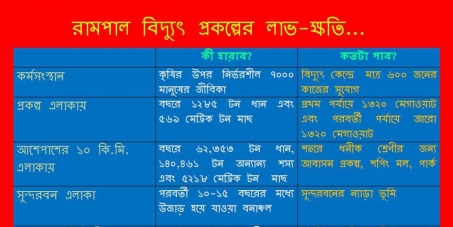 By continuing you agree to receive Avaaz emails. Our Privacy Policy will protect your data and explains how it can be used. You can unsubscribe at any time. If you are under 13 years of age in the USA or under 16 in the rest of the world, please get consent from a parent or guardian before proceeding.
This petition has been created by Indranil S. and may not represent the views of the Avaaz community.
x

Sign this petition
Indranil S.
started this petition to
NTPC, India
Noting that a thermal power plant near human habitat and on agricultural land was not viable, a Central green panel has refused to give approval to the National Thermal Power Corporation (NTPC) to set up a 1320 MW coal-based project in Madhya Pradesh. – The Hindu October 8, 2010.

Sunderbans is the largest mangrove patch in the world. Over a period of time, especially for last 200 years, we have lost 66% of it. The forest that protects us from frequent cyclone, storm and other natural disasters. Let us not make things worse. In a joint venture by NTPC (India) and BPDB (Bangladesh), 1837 acres of land, just 14KM away from the forest, is going to host a huge Dinosaur – a thermal power plant. Do you still need any more data beyond this? Well just for the sake of appreciation of the problem; let us have a look at the few visible impacts bypassed purposely in the Environmental Impact Assessment:
At the construction phase and beyond
================================
– The transportation of coal and other raw materials
– Impact of the CO2 and NO2 emissions of the tools, machineries and transportations
– Sound pollution
– Solid wastes, ecologically dangerous, admitted in the EIA report without a proper plan
– Water pollution caused by tools, machineries and transportations
– The known effect of dredging
– The lost mangrove forest of Passur river

Plant operation
=============
– Daily Emission of 142 tons of SO2 and 85 tons NO2
– 79 Lakh tons of CO2 emission in a year
– Drying up of Passur river
– Water discharge : Passur River at a rate of 100 m3/hr
– Rise in air temperature – the temperature of the discharged gas is calculated 125degree Celcius
– 7 Lakh 50 thousand tons of fly ash and 2 Lakh ton bottom ash
– Sound pollution: not quantified but admitted that it will be much higher than the permissible limit
– Health hazards: The heavy metallic discharge will create

Taking into consideration these factors and many many others not mentioned here, we as conscious concerned citizen urge NTPC to stop this suicidal project in the name of humanity, nature and future.

Today: Indranil S. is counting on you