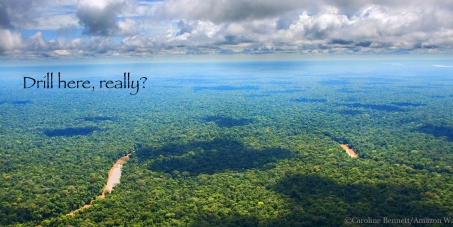 Save Yasuní, the Last Wonder of the Amazon!

By continuing you agree to receive Avaaz emails. Our Privacy Policy will protect your data and explains how it can be used. You can unsubscribe at any time. If you are under 13 years of age in the USA or under 16 in the rest of the world, please get consent from a parent or guardian before proceeding.
This petition has been created by Ivonne Y. and may not represent the views of the Avaaz community.
x

In Ecuador thousands of us have taken to the streets to protest President Rafael Correa’s decision to drill in Yasuní-ITT. The area is the most biodiverse rainforest on the planet and the home to two of the last indigenous communities living in voluntary isolation.


Drilling in Yasuní-ITT is a choice, not a necessity. If President Correa raised taxes on the 110 biggest businesses in Ecuador by 1.5%- -which now pay a measly 2.9%- -it would raise $20 billion, more than exploiting Yasuní-ITT.
We supported a revolutionary plan to preserve Yasuní-ITT, and are gathering signatures for a national referendum that would reverse the decision to drill, but the government is trying to intimidate us.

The government is launching a counter-offensive on rights, expelling high school students who rally for Yasuní, criminalizing insults on social media, threatening to ban print newspapers, and erasing our country’s last peoples living in voluntary isolation—the Tagaeri and the Taromenane—from its maps of the ITT oil block so that it can drill there without violating Article 57 of our constitution, which protects both groups from “ethnocide.”

If we are able to defend Yasuní-ITT, it will

· Protect one of the last refuges of the American jaguar and millions of species of plants and animals.

· Defend some of the world's last peoples living in voluntary isolation, the Tagaeri and the Taromenane.

·Stop us from repeating Texaco's (now Chevron's) legacy in the Ecuadorian Amazon.

With Texaco’s arrival, two nomadic indigenous groups disappeared forever. Texaco contaminated much of the Ecuadorian Amazon and left an epidemic of cancer in its wake. Despite promises of best practices after Texaco left, from 2000 to 2010, there were 539 oil spills in Ecuador, nearly one per week.

For these reasons, we need the support of the international community. We have to tell Ecuadorian President Rafael Correa to safeguard the rights of the indigenous peoples and protect Yasuní-ITT, one of the last natural wonders of the world

Today: Ivonne Y. is counting on you

Ivonne Y. needs your help with "Save Yasuní, the Last Wonder of the Amazon! ". Join Ivonne Y. and 59,457 supporters today