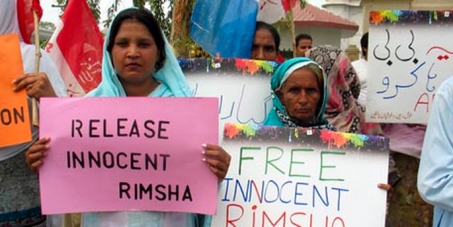 Save my young daughter's life!

By continuing you agree to receive Avaaz emails. Our Privacy Policy will protect your data and explains how it can be used. You can unsubscribe at any time. If you are under 13 years of age in the USA or under 16 in the rest of the world, please get consent from a parent or guardian before proceeding.
This petition has been created by Misrek . and may not represent the views of the Avaaz community.
x

Sign this petition
Misrek .
started this petition to
President Asif Ali Zardari
Update: Our outcry has been delivered to the government. Now, tension is building -- Pakistani police have arrested a cleric for allegedly planting pages of a Koran in Rimsha's bag, while 600 Christian families have reportedly been forced out of their homes. Let's hit 1 million, help free Rimsha and help protect this vulnerable community!

This is a message from Misrek Masih, of Islamabad, Pakistan.

Last week an enraged crowd threatened to burn my daughter alive and in the coming days, a judge will decide whether she goes free, or stays in jail. Rimsha is a minor with mental disabilities and often isn't in control of her actions. Yet local police here in Pakistan have charged her with desecrating the Koran, and we are afraid for her life.

Right now she is being held in a maximum-security jail, and in hours, she will face the court under Pakistan's anti-blasphemy laws, which carries the death sentence. We are a poor Christian family and witnessing mob fury over my daughter's case and many other families have faced similar intimidation forcing them to either flee or live in fear. But the international attention on Rimsha’s case has emboldened Pakistani Muslim leaders to speak out against this injustice and forced President Zardari's attention.

Please help me keep up the global outcry on my daughter's case. I urge you to sign my petition to President Zardari to save Rimsha and demand protection for us and other vulnerable minority families. Avaaz will share this campaign with the local and international media which are watched carefully by all the politicians here.

Today: Misrek . is counting on you

Misrek . needs your help with "Save my young daughter's life! ". Join Misrek . and 33,019 supporters today