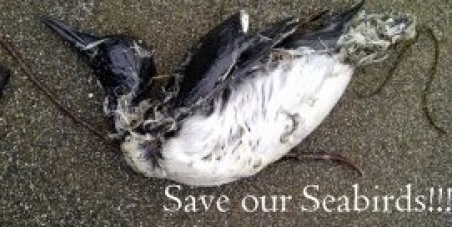 Please sign this petition to help save the lives of hundreds of seabirds who might be affected the next time damaging chemicals are legally discharged in our sea!!

Help our government realise the damage caused by recent events which could have been avoided if action was taken sooner!

Guillemots, razorbills, fulmars and even puffins, gannets and skuas have been pulled off the beach!!

Now it is confirmed PIB has been found on dead spider crabs, dogfish and in the stomachs of sand eels??? Is it entering our food chain??

PIB is commonly used in enginefluids as well as chewing gum and sealants, it is currently legal to discharge this substance into the sea over 12 miles offshore. This also happens to be where many of the seabirds affected spend most of their time diving and fishing for food.

It is totally unacceptable to just do nothing; we have to investigate the source of these large scale spills, and move to control all substances which have the potential to damage our delicate marine environment and the creatures that live within it.

THIS MUST NOT HAPPEN AGAIN!!

Please, please sign this petition to help our Minister for the Environment, Richard Benyon, realise how important this issue is!!

Our sea creatures have enough problems to contend with without also being so needlessly hit by this too.

Please click the link below to go to a video made by Steve Trewhella in February showing rescuers hard at work….

Thank you for taking the time to sign and read this now please please don’t forget to SHARE!!

The center who are looking after the birds.... RSPCA West Hatch....are running short of funds so any donation would be greatly received to help get the survivors back into the wild!! Thank you!

Cornwall Wildlife Trust are recording numbers of dead birds so if you see any please call them on 0845 201 2626, this information is very important to help put further pressure on the government.

The Maritime and Coastguard Agency (MCA) is the UK authority that responds to pollution from shipping and offshore installations. The MCA is regularly called upon to react to a wide range of maritime incident. Please fire off a quick email to them to ask exactly what they are doing to identify the perpetrators and make sure this won't happen again. Email: infoline@mcga.gov.uk. We need to ensure all is being done to investigate this disaster!!

Write to your MP or MEP! You can copy and paste the petition and send an adapted version to your MP via email.......this will only take a few minutes but the more pressure we put on our Government the better!!