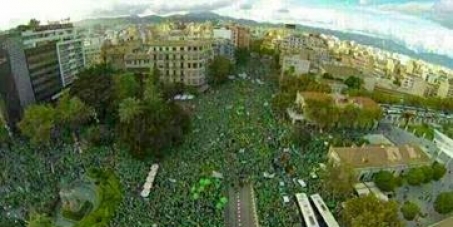 Save schooling in the Balearics

By continuing you agree to receive Avaaz emails. Our Privacy Policy will protect your data and explains how it can be used. You can unsubscribe at any time. If you are under 13 years of age in the USA or under 16 in the rest of the world, please get consent from a parent or guardian before proceeding.
This petition has been created by Cristian R. and may not represent the views of the Avaaz community.
x

Since the start of the academic year a few weeks ago, a teachers' strike has been massively followed in all schools in the Balearic Islands. Teachers saw no other option, having exhausted all other possibilities to open negotiations with the government.

In the last two years all schools have suffered from dwindling resources, overcrowded classes, firing of teachers (especially those devoted to handicapped children), no aid for school meals or transportation, sudden salary cuts... The straw that breaks the camel has been an authoritarian decree aimed at changing the education system towards a "trilingual" one, designed against the islands' culture and identity.

Voices from throughout the Balearic society have pleaded for a solution. Students peacefully supporting their teachers have been bullied. Members of the government's party publicly threatened parents who support the teachers' strike with kidnapping their children. All of this was clearly understood by the 100,000 peaceful protesters who demonstrated on September 29th in Palma, and many more throughout all the islands, everybody wearing green shirts. The government has stated that there is no option other than abiding by its arbitrary rules.

Teachers voted to start classes as a sign of responsibility and dignity, without putting off the strike. Classes have been seriously disrupted by contradictory orders. The strike has been back again for a couple days, and will continue this week. Teachers have the backing of all associations of students' parents, and are still waiting for any reasonable move on the government's side.

In the end, it is the right of children to attend school that is being violated by such attitude. It is urgent and most important to ensure that the government accepts constructive talks with teachers. Only international pressure can do so. We need your help!

Today: Cristian R. is counting on you

Cristian R. needs your help with "Save schooling in the Balearics". Join Cristian R. and 2,336 supporters today