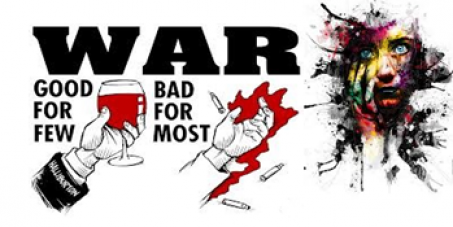 By continuing you agree to receive Avaaz emails. Our Privacy Policy will protect your data and explains how it can be used. You can unsubscribe at any time. If you are under 13 years of age in the USA or under 16 in the rest of the world, please get consent from a parent or guardian before proceeding.
This petition has been created by Steven P. and may not represent the views of the Avaaz community.
x

THE COST OF WAR IS DISGUSTING!!!

Millions die every year from hunger, greed and war related illness so today we stand together and say “NO MORE WAR”

“War does not determine who is right - only who is left”

America and Iran are on the brink of WW3 with Russia, China, Afghanistan, Israel with Syria playing out as the battle ground for ww3

Please make your vote count and “STOP THE WAR”


1% own 39% of All Global Wealth and the stakes are too high right now for you and your children, citizens of earth to sit back and wait for a horrendous outcome.

We Hurtle Toward Economic Oblivion with 40 trillion dollars of debt.

The rich fund the campaigns of all our politicians and they exert a tremendous amount of influence over international organizations such as the United Nations, the IMF, the World Bank and the WTO.

Rupert Murdoch - News about war is GOOD news as the price of oil increases and his shares go up. He will fire anyone who speaks up against the war in Syria.

If the USA only spent 80% of its military budget we would solve world hunger.

Here is a poll from the www.pollingreport.com in 2012
"Do you approve or disapprove of the U.S. withdrawing military troops in Afghanistan?"
Approve 78%
Disapprove 16%
Unsure 5%

THANK YOU FOR YOUR SUPPORT

TODAY WE CAN START TO SAVE LIFE'S FOR A BETTER FUTURE

Today: Steven P. is counting on you

Steven P. needs your help with "Say "NO to WW3" stop the killings around the world before it is too late". Join Steven P. and 393 supporters today