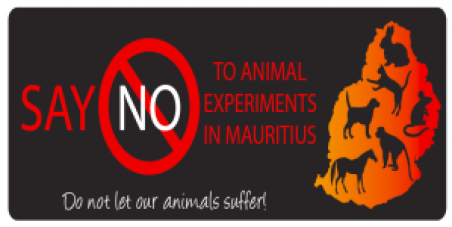 Say NO! to Animal Experiments in Mauritius!

By continuing you agree to receive Avaaz emails. Our Privacy Policy will protect your data and explains how it can be used. You can unsubscribe at any time. If you are under 13 years of age in the USA or under 16 in the rest of the world, please get consent from a parent or guardian before proceeding.
This petition has been created by Save A. and may not represent the views of the Avaaz community.
x

Say No! to Animal Experiments in Mauritius!
No! to Experiments on our Primates or any animals!

In July 2013 clauses for animal experiments have been integrated in the Mauritius 'Animal Welfare Act 2013' ! These clauses were to be a preliminary base to a 'Pre-Clinical-Research Bill', a bill which was announced to be in preparation and would legalise and define animal experimentation in pre-clinical research in Mauritius.
We say a resounding NO to that!


Cruel, outdated, and invasive experiments on animals are no longer needed in this day and age. While we, in no manner, are against preclinical research, we fiercely denounce the use of animals in these researches. Animals are sentient creatures with complex nervous systems similar to humans. Evolving scientific understanding acknowledges animals to have substantial social and physiological needs seldom met under laboratory conditions. We advocate that proven more effective, non-animal techniques that yield both ethical and technological advantages are used instead.

We, therefore, strongly urge the Mauritian government to look into preclinical alternatives to the use of animals for biomedical research. Superior non-animal alternatives to research concerned with toxicity testing, endocrine disruptors, carcinogenicity, eye and skin irritation, dermal penetration testing and countless others have already been tried and approved by the European Reference Laboratory On Alternatives To Animal Testing (EURL ECVAM) and the Interagency Coordinating Committee on the Validation of Alternative Methods (ICCVAM). Non-animal techniques in research are also backed by renowned organisations such as the Physicians Committee for Responsible Medicine.

These cruelty-free, ethical and more reliable non-animal alternatives include: computational based methodologies (in silico), in vitro testing using cell and tissue cultures, epidemiology, clinical studies on patients, and other non-animal methods such as pathological investigations (autopsies and biopsies) which are assuredly going to yield more precise results than painful and unnecessary animal testing.
Experiments and testing on animals do not belong to this era and, as responsible citizens of this world, it is our duty to continually develop alternatives to methods that generally impose immense stress, fear and suffering on our animal counterparts.

Indeed, the European Union is moving towards a ban on the marketing of cosmetics with ingredients tested on animals by 2013. This highlights the longstanding unethical aspect of using animals and the worldwide movement away from animal experimentation when non-animal methodologies abound. Both human and animal kind will be better off if cruelty-free methods are chosen rather than subjecting animals to atrocious and, very much avoidable, pain.

Mauritius is a country which can greatly benefit from the findings of distinguished international agencies and thus avoid duplicative testing altogether. There is absolutely no need to indulge in animal experimentation. Moreover, grants and other financial gain will be confined to conglomerates such as the ones already deriving profit from the much frowned upon monkeys breeding and export business. The general population of Mauritius will not gain anything from a cruel and unjustified legislation allowing animal experiments and testing.

A better solution is investing in non-animal biomedical research and studies which will not only boost the country’s image, but put us in the limelight as a country which dares to embrace animal welfare and take a step forward to show to the world that we are beyond subjecting our animals to unneeded cruelty when viable, cruelty-free methods exist and can be further developed.

It is our heartfelt appeal that plans to legalize animal experimentation and testing are immediately dropped and that ethical non-animal research alternatives be implemented.
Report this as inappropriate
There was an error when submitting your files and/or report.
Inaccurate Inappropriate language Hate speech Illegal Commercial/spam Offensive
×

Today: Save A. is counting on you

Save A. needs your help with "Say NO! to Animal Experiments in Mauritius!". Join Save A. and 31,097 supporters today